Can Protest In China Turns To Something Bigger? 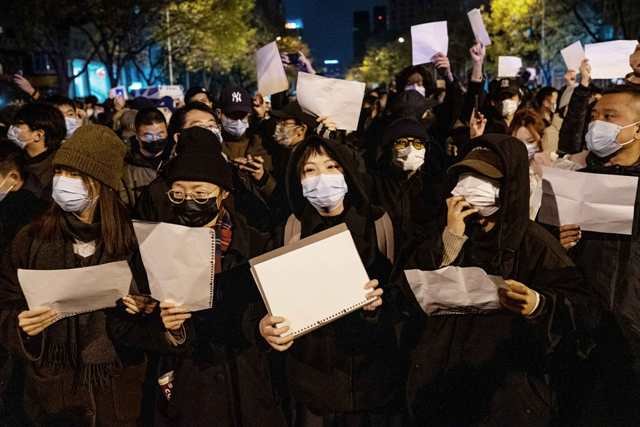 First time in decades, thousands of people have defied Chinese authorities to protest at universities and on the streets of major cities, demanding freedom from incessant Covid tests and lockdowns but strict censorship and the Communist Party’s tightening grip over all aspects of life.

Across the country, “want freedom” has become a rallying cry for a groundswell of protests mainly led by the younger generation, some too young to have taken part in previous acts of open dissent against the government.

“Give me liberty or give me death!” crowds by the hundreds shouted in several cities. Some protesters chanted for free speech, democracy, the rule of law, human rights, and other political demands across cities from the eastern financial hub of Shanghai to the capital of Beijing, the southern metropolis of Guangzhou, and Chengdu in the west.

While protests in several parts of China appear to have largely dispersed peacefully over the weekend, some met a stronger response from authorities – and security has been tightened across cities in a country where authorities have far-reaching surveillance and security capabilities.

In Beijing, a heavy police presence was apparent, a day after protests broke out there. Police vehicles, many parked with their lights flashing, lined eerily quiet streets throughout parts of the capital, including near Liangmaqiao in the city’s central Chaoyang district, where a large crowd of protesters had gathered Sunday night.

When asked Monday whether “the widespread display of anger and frustration” seen across the country could prompt China to move away from its zero-Covid approach, a Foreign Ministry spokesman dismissed suggestions of dissent.

“What you mentioned does not reflect what actually happened,” said spokesperson Zhao Lijian, who added that authorities had been “making adjustments” to their Covid policies based on “realities on the ground.”

“We believe that with the leadership of the Chinese Communist Party and the Chinese people our fight against Covid-19 will be successful,” he said.

In a symbolic protest against ever-tightening censorship, young demonstrators across China held up sheets of white paper – a metaphor for the countless critical posts, news articles, and outspoken social media accounts that were wiped from the internet.

The sentiment was echoed by the US. During a briefing on Monday, John Kirby, the communications coordinator at the National Security Council, repeatedly reiterated the administration’s policy that “people should be allowed the right to assemble and to peacefully protest policies or laws or dictates that they take issue with.”

Throughout the weekend, censors moved swiftly to scrub videos and photos of the protests from the Chinese internet, though the startling images made headlines worldwide.

In online commentaries, Chinese state media made no mention of the protests, instead focusing on the strengths of Beijing’s anti-Covid policies, emphasizing they were both “scientific and effective.”

But to many protesters, the demonstrations are about much more than Covid – they’re bringing together many liberal-minded young people whose attempts to speak out might otherwise be thwarted by strict online censorship.

In some cases, the protests have taken on an even more defiant tone and openly called for political change.

During the first night of the demonstrations in Shanghai, a crowd shouted “Step down, Xi Jinping! Step down, Communist Party!” in an unprecedented, direct challenge to the top leader. On Sunday night, some protesters again chanted for the removal of Xi.

The danger is that the longer the protests continue, the more dangerous they become. The security forces in China are brutal, and their actions against the protesters could easily get out of control.

The saddest thing about the protests in China is the inability of the outside world to do anything. The regime can completely ignore what the rest of the world thinks. In the meantime, the world can only watch, with horror, and wait to see what happens next.