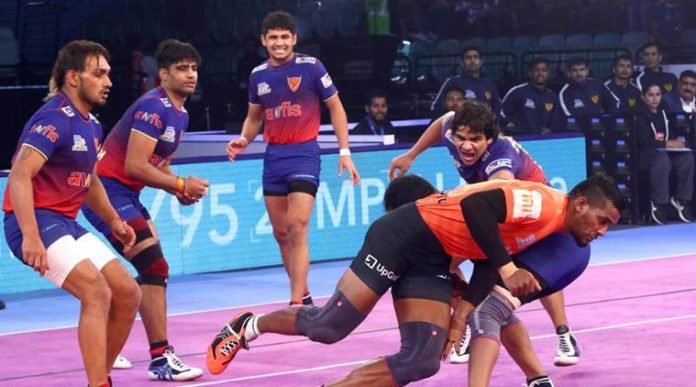 The prolific raider Naveen Kumar scored 16 points for Dabang Delhi and was ably matched by his raiding partner Vijay (9 points), as they gave Pune defenders a torrid time on the mat.

The match was billed as a head-to-head between two of the country’s top raiders — Naveen Kumar of Delhi and Rahul Chaudhari of Pune — and the early minutes showed glimpses of both athletes and their abilities. Rahul opened the scoring for Pune, who despite lacking the experience of Delhi, seemed keen to match them blow for blow.

But Naveen Kumar had other plans as he clinched points raid after raid to reduce the Pune men on the mat. With Vijay taking the role of the secondary raider, the Delhi duo inflicted the first all out in the 8th minute to make the scores 10-5 in their favour.

Experienced Ajay Thakur didn’t have to make a single raid for Delhi despite starting the match as the Season 8 league winners ran riot to clinch another all out with 3 minutes remaining in the half to open up at 11-point lead. Nitin Tomar, Pune’s star raider wasn’t going to let the Delhi team run away with the lead though. He reduced Delhi to two men on the court but Vijay produced a successful raid to prevent an all-out and end the first half 22-15.

Pune coach and Kabaddi legend Anup Kumar had asked his men to target Delhi’s Manjeet Chhillar and that is exactly what they did in the second half. The Delhi defender’s error gave Pune the opportunity to seal an all-out in the 6th minute of the second half to close the gap from Dabang to just four points.

But a revived Naveen Kumar was in no mood to let Pune sniff an opportunity. He claimed his Super 10, tackled Rahul Chaudhari, and then touched Nitin Tomar in three successive moves to shift the momentum to Delhi. Vijay ensured Dabang’s attack was two-headed with high-quality raids as they inflicted another all out with five minutes remaining in the match. Aslam Inamdar’s late cameo wasn’t enough for Pune to make a comeback.