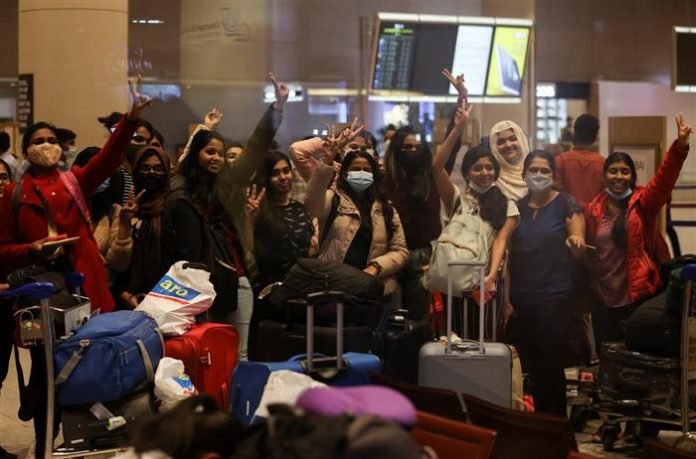 India’s Foreign Secretary Harsh Vardhan Shringla on Sunday said that more than 1,000 Indian students have been evacuated so far and more will be airlifted by Monday via neighbouring countries of Ukraine.

Briefing the media here, he said that till now four flights have come back with Indian students and two are likely to depart tonight or by tomorrow morning to evacuate more students. “The Government of India has launched ‘multi-pronged’ Operation Ganga to evacuate our citizens stranded in Ukraine. This evacuation process will be at government cost,” he said.

He also said that the Indian Embassy in Kiev and Ministry of External Affairs (MEA) had issued a number of advisories prior to the start of war. Four thousand of our nationals had left before the conflict began, pursuant to these advisories. “We estimated that about 15,000 citizens were left in Ukraine,” he added.

Noting that since the airspace in Ukraine was closed, the Foreign Secretary further said, “We have identified land evacuation options from Hungary, Poland, Slovakia, and Romania wherein the specific border crossing points have been identified and the MEA had deployed teams to assist in the evacuation process.”

Admitting that border crossing to Hungary and Romania is functioning, however, the exit point to Poland is choked due to lakhs of foreign nationals trying to escape from that point. Those who are near the borders of Hungary and Romania are guided towards their border points in phases. He also said that the MEA officials have advised the stranded Indians to move towards westward to reach Uzhhorod in western Ukraine, at the border with Slovakia and near the border with Hungary and from there they can take a train to reach the Romanian capital Bucharest and from there they will be airlifted.

He also said that a hotline facility has been set up at the Indian Embassies in Hungary, Poland, Slovakia, and Romania and the numbers have been flashed in advisories, on the website and social media handles of the Ministry. This will work as an interface between the Indians there and the officials engaged in the evacuation process.

The Foreign Secretary also informed that the Minister of External Affairs S. Jaishankar has spoken to his counterparts in Hungary and Moldova seeking their support in evacuation of Indian nationals. The MEA officials will arrive in Moldova by Monday morning to facilitate border crossing.

Listing out the flights planned for evacuation for Indians via neighbouring countries, Shringla said that a total of nine flights were planned by the government through the civil aviation ministry via Bucharest and three via Budapest. Out of these 12 flights, five have come back with Indians so far.

Responding to a question, Shringla also said that a First Secretary level officer in the Indian embassy in Moscow has been asked to make arrangements for stay of Indian evacuees once the situation at the Russian border eases. Right now it is a conflict zone, therefore the evacuation cannot be from the Ukraine-Russian border.