What Is The Importance of Chhath Puja And Why Is It Called Mahaparva? 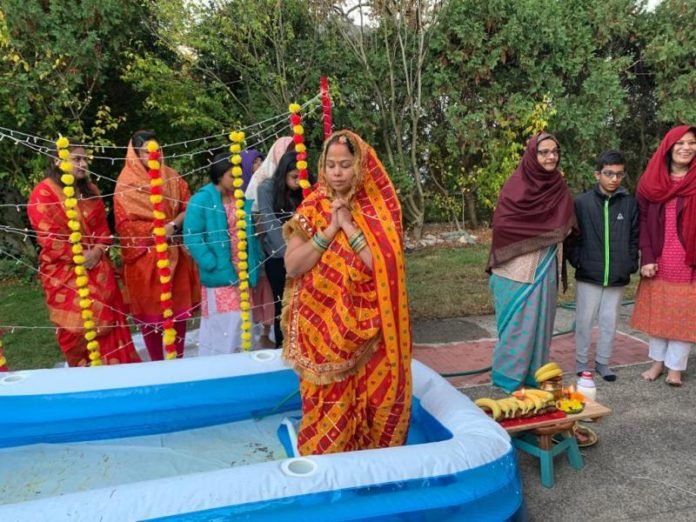 Chhath is an ancient Hindu festival that originated in the Indian subcontinent, specifically in the Indian states of Bihar, Jharkhand, Uttar Pradesh, and West Bengal. The Goddess of the festival is Chhathi Maiya, the sixth form of Devi Prakriti and Lord Surya’s sister. Vikram Samvat is observed six days after Deepavali, on the sixth day of the lunar month of Kartika (October-November) in the Hindu calendar.

Today, Chhath Puja is being celebrated not only in the eastern states of India but also in the country and abroad.

Rituals & Traditions
Chhath Puja is a folk festival that lasts four days. It starts with Kartik Shukla Chaturthi and ends with Kartik Shukla Saptami. Chhath is celebrated twice a year. While Chaiti Chhath or Chota Chhath is celebrated in summer in the months of March or April as per the Gregorian calendar. The rituals are the same in both festivals.

Nahaay Khaay (Day 1)
The first day of Chhath Puja has arrived. The Parvaitin (faster) must take a holy bath before thoroughly cleaning the entire house, its surroundings, and the pathways to the Ghat. Sattvik Lauki Bhaat is typically prepared by Parvaitin. After offering it to the deity as Bhog in the afternoon, the Parvaitin consumes it as their final meal.

Kharna (Day 2)
The second day of Chhath Puja is known as Kharna. On this day, devotees are not permitted to drink even a drop of water. In the evening, they offer, eat and distribute Gki kheer (jaggery kheer), known as Rasiaav, with Roti.

Sanjhali Aragh (Day 3)
This day is spent at home preparing prasad (offerings), which typically consists of a bamboo basket decorated with fruits, Thekua, and rice laddus. On the eve of this day, the devotee takes the entire household to a riverbank, pond, or other large body of water to make Arghya offerings to the setting sun.

During aragh, Gangajal water is offered to the Sun God, and the Chhathi Maiya is worshipped with prasad. After the Sun God is worshipped, Chhath songs are sung at night, and the Vrat Katha is read.

When the devotees return home, they perform the Kosi Bharai ritual with the rest of the family. They take 5 to 7 sugarcanes and tie them together to form a mandap, under which 12 to 24 Diya lamps are lit and Thekua and other seasonal fruits are served. The same ritual is performed the following morning between 3 and 4 a.m., and devotees then offer aragh or other offerings to the rising sun.

Bhorki Aragh (Day 4)
On the last day of Chhath puja, devotees must go to the riverbank before sunrise to offer an aragh to the rising sun. Following that, Chhatti Maiya is asked to protect the child as well as the peace and happiness of the entire family. Following worship, devotees drink water and eat prasad to break their fast. This is known as Paaran or Parana.

Why Is It Called Mahaparva?

Chhath Puja originated during the early Vedic period, when sages would fast for days and perform the puja using Rigvedic mantras. Karna, the son of Lord Surya and king of Anga Desh, modern-day Bhagalpur in Bihar, and Pandavas with Draupadi performed the Puja to overcome obstacles from their lives and reclaim their lost kingdom.

The Mahaparva Chhath honors the sun god Surya. The sun is visible to all beings and serves as the foundation of all life on Earth. On this day, Chhathi Maiya is worshipped alongside the Sun God. Chhathi Maiya (or Chhathi Mata) protects children from diseases and problems and grants them long lives and good health, according to Vedic astrology.

History
Chhath Puja holds great importance in ancient history. And the five most important stories related to Chhhath Puja are:

The Chhathi Maiya is worshipped during the Chhath festival, as mentioned in the Brahma Vaivarta Purana. The Chhath Puja is said to have begun in the holy city of Varanasi by the Gahadavala dynasty.

The festival is well-known in the Munger region for its association with Sita Manpatthar. The main center of public faith in Munger is the Sitacharan temple, which is located on a boulder in the middle of the Ganges. The goddess Sita is said to have performed the Chhath festival in Munger. Only after this event did the Chhath festival begin. As a result, Munger and Begusarai celebrate Chhath Mahaparva with great fanfare.

Another legend has it that King Priyavrat, son of First Manu Swayambhu, was depressed because he had no children. Maharishi Kashyap requested that he perform a yajna. He performed a yajna for a son under Maharishis orders. Following this, Queen Malini gave birth to a son, who died shortly after birth. Because of this, the king and his family were devastated. Then Mata Shashthi appeared in the sky. When the king prayed to her, she replied, “I am Chhathi Maiya, the Sixth form of Devi Parvati, and I protect all the children of the world and give the blessings of children to all childless parents.” She then blessed the lifeless child with her hands.

And, as mentioned in the famous epic Ramayana, when Rama and Sita returned to Ayodhya, people celebrated Deepawali, and Ramrajya was established on its sixth day. On this day, Rama and Sita fasted, and Sita performed Surya Shashthi/Chhath Puja. As a result, she was blessed with Luv and Kush as sons.

Who can do Chhath Puja?

The main worshippers, called Parvaitin are usually women, however, Chhath is not a gender-specific festival. In some communities, once a family member starts performing Chhath Puja, they are duty-bound to perform it every year and pass it on to the following generations. In today’s time, the practice of Chhath Puja is increasing even among men.

The prasad offerings include Thekua, Khajuria, Tikri, and Kasar and seasonal fruits like sugar canes, sweet lime, coconut, banana, and many seasonal fruits, all offered in small bamboo baskets. The food is strictly vegetarian and is cooked without salt, onions, or garlic.

Chhath puja is considered an environmentally friendly festival that involves the elements of the universe being worshipped and paid attention to. The best part of this festival goes beyond the caste differences that exist in Hindu society. Therefore, on this day, offerings are made from various river banks through prayers and rituals.

What do people have to say about Chhath Puja?

Avnish Jaiswal from New Jersey, “this was our first chhath puja, it was a lot of fun celebrating the puja. It is the blessings of Chhati Maiya, due to which this worship was successful.”

Amrendra from New Jersey “It’s pleasantly to see celebrating the festival of Chhath in such a respectful and traditional way. I am glad I could be a part of this celebration in New Jersey.”