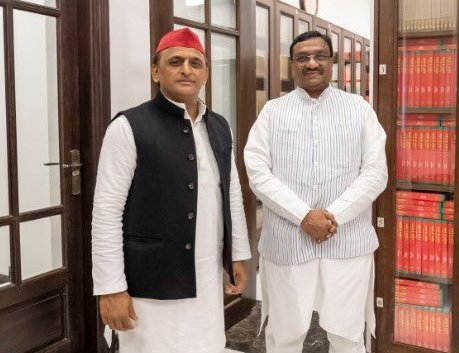 This is the eighth exit from the BJP in three days with a crucial election less than a month away. They are all likely to join Akhilesh Yadav’s Samajwadi Party.

Just 24 hours ago, Dharam Singh Saini, a four-time MLA from Nakur in Saharanpur and a key OBC (Other Backward Class) leader, had rubbished reports of leaving the BJP.

He had also slammed Swami Prasad Maurya, the first to quit and set the tone for a series of exits.

“I am and will be in the BJP. I am not leaving the party,” Mr Saini had said in a video he released to refute the reports.

But his resignation followed a similar pattern to that of six others, with Akhilesh Yadav playing his role by sharing a photo with the latest defector and “welcoming him”. Like always, Mr Yadav used the hashtag MelaHobe – a tweaked version of the Trinamool Congress’s wildly successful catchphrase “Mela Hobey (game on)”.

Mr Saini, earlier with Mayawati’s Bahujan Samaj Party (BSP), had joined the BJP in 2016 along with Swami Prasad Maurya.

Congress Is Hope For BJP, Not Goans: Arvind Kejriwal

In a dig at the Congress, Aam Aadmi Party National Convener Arvind Kejriwal on Monday, January 17, said that the Grand old Party is...
Read more