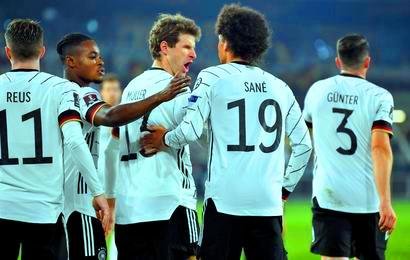 Germany continued their spotless record under Hansi Flick as they thrashed Liechtenstein 9-0 in a World Cup qualifier in Wolfsburg, on Thursday.

Hansi Flick made history as the first Germany coach to win his first six games in charge, Flick had to make numerous changes, with five players out because of defender Niklas Sule’s Covid infection.

Thomas Muller and Leroy Sane both scored twice for the hosts, who have already qualified for Qatar 2022.

Liechtenstein was reduced to 10 men inside the first 10 minutes.

Jens Hofer was sent off for kicking Leon Goretzka with a high challenge in the face, and after a short delay, Manchester City’s Ilkay Gundogan converted the resulting penalty.

It got worse for the visitors, who conceded three goals in three minutes, starting with Daniel Kaufmann turning in an own goal in the 20th. Sane then slotted in before Marco Reus added another.

With Flick’s predecessor Joachim Low, who received an official farewell before the game, watching from the stands, Germany struck again four minutes after the restart with Sane before late goals from Muller and Ridle Baku.

Muller then scored his second in the 86th before another own goal by Liechtenstein, this time from Max Goppel.