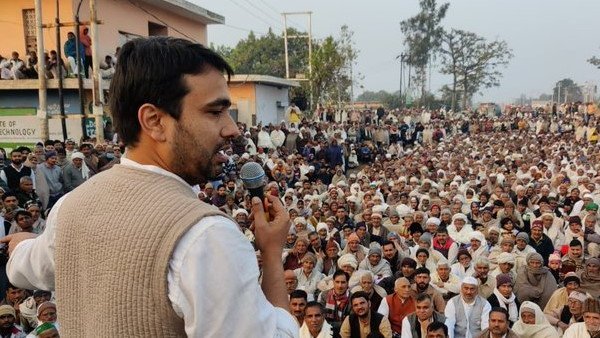 Members of the Rashtriya Lok Dal (RLD) warned farmers against voting for the BJP in the upcoming elections, claiming that the farm laws would be reimposed once the elections are finished.

“They have decided to repeal the laws, but if they win the elections, the BJP will bring back these laws,” said RLD President Jayant Chaudhary, while addressing a gathering in Baghra village on Saturday.

“The way the prime minister said that he could not make farmers understand the laws is alarming. Besides, a Bihar government minister also stated that the farming laws would be imposed again. I am not saying this but the BJP leaders and their allies are saying this,” he said.

Meanwhile, AAP spokesman Vaibhav Maheshwari said that it is strange that farmers of the country do not have faith in Prime Minister Modi’s words.

“Today, the country has reached a state where the Prime Minister’s words have no value. The farmers are saying that we will trust the Centre when it will withdraw these farm laws in Parliament,” he said.

Latest, Rajasthan Governor Kalraj Mishra on Sunday lamented the repeal of the three contentious farm laws and said that the laws can be formed again later.

Reacting to Friday’s announcement of Prime Minister Narendra Modi to repeal the farm laws, Mishra said: “The government tried to explain to farmers the pros of farm laws. But they were adamant about repeal. The government felt that it should be taken back and re-drafted later if needed but right now they should repeal as farmers are demanding.”