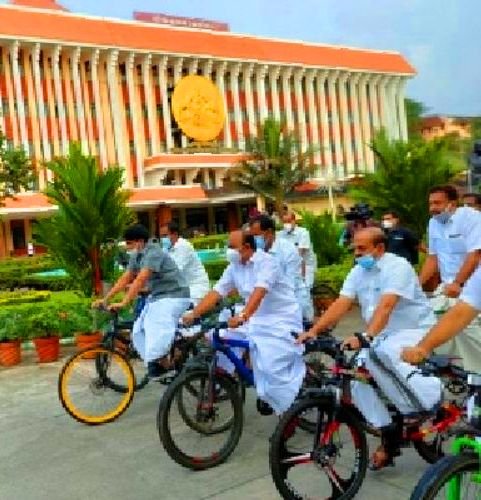 The Congress party has been protesting against the hike in petrol and diesel prices in Kerala and urging the state government to reduce the tax levied on it.

Clad in the usual pristine white khadi dhoti and shirt, the two-time MLA was followed by a galaxy of TV cameramen when he entered the campus on the bicycle, which is generally regarded as the poor man’s vehicle.

Though it is rare for anyone to reach the Assembly complex on a bicycle, the MLA had a smooth entry at the main entrance, where security personnel welcomed him with the usual honorary salute.

The MLA later parked his ”vehicle” in the parking yard near a luxury four-wheeler.

The state government was looting the common people without reducing the tax on petrol and diesel, Vincent told reporters.

Meanwhile, workers of the Congress party staged the 15-minute stop wheel protests in the district headquarters across the state in the morning.

KPCC chief K Sudhakaran had earlier made it clear that the protest would be in such a manner that no traffic blocks would be created and no difficulty would be posed for the common people.