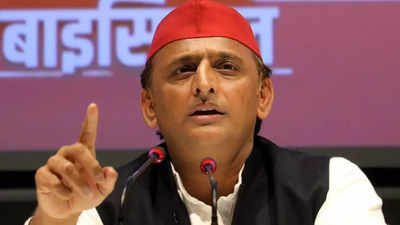 Samajwadi Party chief Akhilesh Yadav on Wednesday alleged that BJP dons the “religious spectacles” when elections come close and that the party views everything on the basis of religion.

Speaking to media after addressing a rally in UP’s Jaunpur, Akhilesh Yadav said, “As elections approach, BJP wears religious spectacles and sees everything on the basis of religion.”

The former Chief Minister claimed that the support of the people in the rally shows that there will be a change in the state’s leadership after the Assembly polls next year.

“If the people are here supporting us at 11 am, and the dates of the elections have not been announced yet, it shows that there would be a change. I thank the people who have supported us,” he said.

The Samajwadi Party chief further called for the suspension of Union Minister of State Home Ajay Mishra Teni in connection with the Lakhimpur Kheri incident.

This follows the development where a Special Investigation Team (SIT) of the UP Police submitted that the killing of four farmers and a journalist was “a pre-planned conspiracy” and that the violence leading to the deaths was “not an act of negligence or carelessness”.

“BJP should suspend their MoS Home (Ajay Mishra). There should be strict action against the culprits in the Lakhimpur Kheri incident,” the SP leader said.