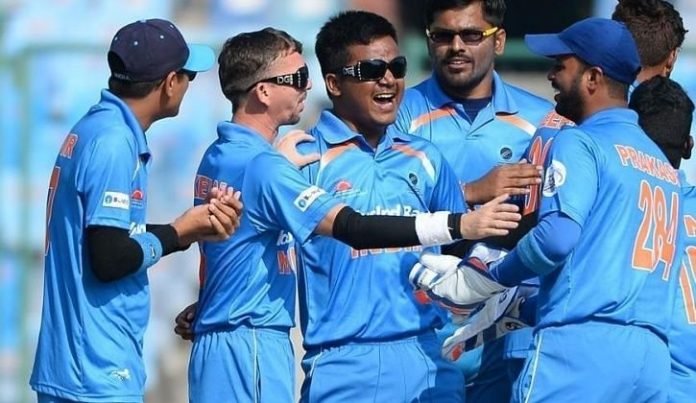 Andhra Pradesh wins the fourth edition of the IndusInd Bank Nagesh Trophy for the third consecutive time by beating Karnataka by 27 runs in the Final on Thursday at the Sri Arun Jaitley Stadium.

Venkateshwara Raowas the highest scorer for Andhra with 85 Runs off 36 balls, and was declared the Man of the Match.

Chief Guest Meenakshi Lekhi, Hon’ble Minister of State for External Affairs of India while applauding the spirit of the players said, “I am amazed at the felicitous co-ordination of the organisers, sponsors, DDCA, British & Australian High Commissions and supporters for their generosity and firm belief in the spirit of our wonderful players. I extend my best wishes to the contending teams. I can be very judicious in my assessment without taking sides. I am excited about the Women’s Blind National Tournament due to be held in Bangalore next year. Our government has been putting in tremendous efforts to bring in the gender parity.”

With a fourth time straight in a row, the Andhra Pradesh team made their entry to the finals of the tournament since its inception in 2019. Whereas this was the 2nd time for team Karnataka to have reached the finals.

The Cricket tournament was organised by The Cricket Association for the Blind in India (CABI) in association with the Samarthanam Trust for the Disabled. India currently holds the Blind Cricket World Cup T20 trophy, won in 2018.

This tournament will help in selecting key players for the upcoming International Championships. Overall, 56 probable players will be shortlisted. 17 players will be finalised for the world cup squad and will represent India in T20 World Cup.