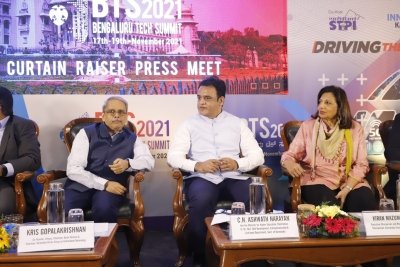 The annual flagship event of the Karnataka government as well as of the Centre, the Bengaluru Tech Summit (BTS-2021), touted to be Asia’s biggest tech festival, is scheduled to be held this year from November 17 to 19 in a hybrid format and will be inaugurated by Vice President M. Venkaiah Naidu, it was announced on Tuesday.

As the world and nation prepare to move forward in a post-pandemic scenario, technology will play an even more critical and all-pervasive role in the successful functioning of businesses and industries across sectors and governments, said C.N Ashwath Narayan, Karnataka’s Minister for Electronics, IT, BT and S&T, Higher Education, Skill Development, Entrepreneurship & Livelihood.

More than 30 countries will take part in the hybrid model, which will be held at the city’s private hotel (The Taj West End). Several dignitaries, including Israeli Prime Minister Naftali Bennett, Australia’s Prime Minister Scott Morrison and the heads of the World Economic Forum in Davos, will attend the conference.

More than 75 concerts will be held at the summit of the 24th edition of BTS, which is underway on the concept of “reform, transformation – achievement”. More than 300 leading companies will participate in the summit, more than 5000 innovations, more than 20 thousand trade delegates will be actively participating and more than 5 lakh technology enthusiasts.

BTS-2021 will be held under the IT, BT, Startup and GIA (Global Innovation Alliance) divisions. Under these divisions, respectively, there will be discussion and dialogue on emerging areas including digital technology, the hybrid multi-cloud world, women entrepreneurs, cell therapy and gene editing.

In addition, Bangalore Next is holding a leadership conference with the aim of maintaining Bangalore’s leading position in the technology sector. In addition, he explained that 22 companies with Unicorn status will be awarded.