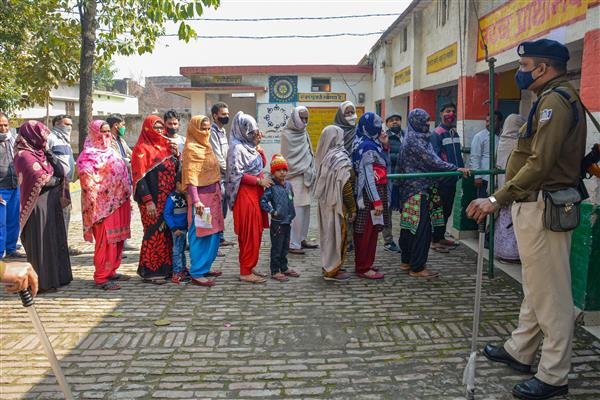 As many as 61 assembly constituencies, spread across 12 districts in eastern Uttar Pradesh, are holding polling for the fifth round of state elections on Sunday. The key constituencies in this phase include Ayodhya and Prayagraj. Once considered Congress bastions, Amethi and Raebareli too will vote on Sunday.

Other districts that are set to hold polling in the fifth phase are Sultanpur, Chitrakoot, Pratapgarh, Kaushambi, Prayagraj, Barabanki, Bahraich, Shravasti and Gonda.

According to the Election Commission data, 2,24,77,494 voters will decide the fate of 693 candidates. The voting commenced at 7am and it will continue till 6 pm.

Among the prominent faces are deputy chief minister Keshav Prasad Maurya, who is contesting from the Sirathu assembly seat in Kaushambi district. He is in direct fight with Apna Dal (Kamerawadi) candidate Pallavi Patel.

In Uttar Pradesh, BJP and allies hold dominant influence over the central and Awadh region seats that vote today. All eyes will be on temple town Ayodhya which was the epicentre of the movement for the construction of a Ram temple. BJP MLA VP Gupta will contest against Pawan Pandey from the Samajwadi Party on this seat. Mr Pandey was dubbed the 2012 “giant killer” from this seat after defeating a five-term BJP MLA.

Prayagraj, formerly Allahabad, will vote today. The city is home to the “Sangam”, a sacred Hindu site, and also has a sizeable student population from all communities owing to numerous coaching centres. Former Congress bastion Amethi also votes today.

This phase is crucial for the BJP as the party and its allies won 50 of the 61 seats here in the 2017 elections. A resurgent Samajwadi Party led by Akhilesh Yadav is the BJP’s biggest challenger here.