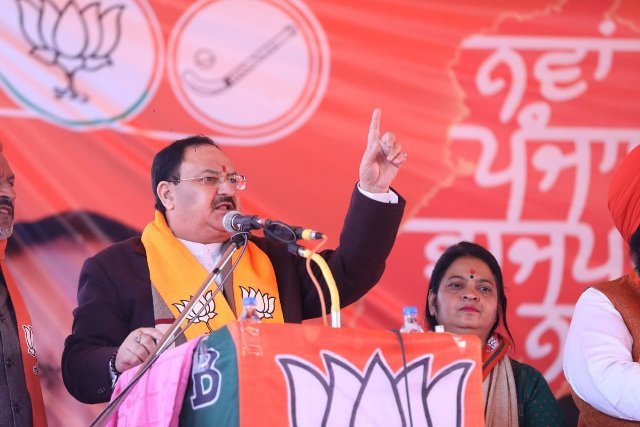 BJP national president JP Nadda attacked the Congress party and said that the hands of its leaders are soaked with the blood of the 1984 anti-Sikh riots, but now they are coming to seek votes from Punjab’s electorate.

“Their big leaders used to say about the anti-Sikh riots in the country that when a big tree falls, then the earth shakes. Now it’s time to shake them,” said Nadda, adding that these leaders put humanity to shame. He was speaking in Nawanshahr district’s Balachaur constituency on Saturday while campaigning for party candidate Ashok Bath.

Nadda said the riot’s victims fought 30 years for justice and commission after commission was constituted and inquiry after inquiry held, but no one wiped the tears of the mothers and sisters who lost their sons and brothers in the riots.

“When the Narendra Modi government was formed in 2014, he did this work and those whose hands were soaked in blood were put in Tihar jail,” the BJP leader said, adding that Modi delivered justice.

“Punjab is known for the Harmandir Sahib (Golden Temple), but our NRI Sikh brothers did not have the permission to offer their contributions at the Golden Temple. Modi ji made it possible under the Foreign Contribution Regulation Act (FCRA) and now our Sikh and Hindu brothers sitting abroad can send their offerings to the temple.” Nadda pointed out that even the GST on langar in all gurudwaras, including the Golden Temple, was waived and the government is reimbursing GST of Rs 325 crore to these religious places every year. Was there no Sikh leader in Delhi who could have done it, he asked.

“The Modi government also fulfilled the long-pending demand to open the Kartarpur Corridor by taking up the matter with Pakistan and by spending Rs 120 crore on the initiative,” he said, adding that now a chair dedicated to Guru Nanak Dev, the first Sikh master, is being set up under the National Institute of Interfaith Studies to spread his teachings.

Promising to make Punjab a drug free state and bring development to the region, the BJP leader blamed the Congress party for pushing the state into terrorism. He also attacked the Aam Aadmi Party alleging that they sold tickets to candidates.