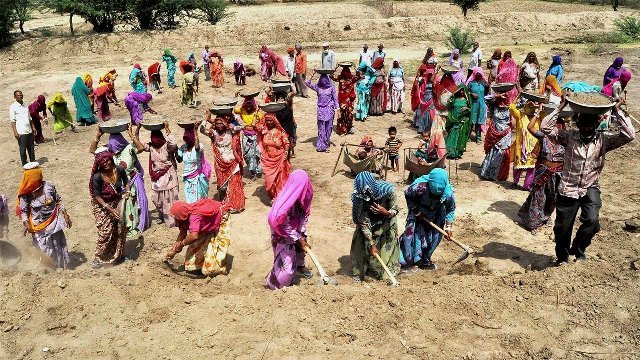 Finance Minister Nirmala Sitharaman on Friday said that the UPA government launched the Mahatma Gandhi National Rural Employment Guarantee Act(MGNREGA) scheme which was infested with ghost accounts and turned out to be a source of corruption at that time.

Responding to the general discussion on the General Budget 2022-23 in the Rajya Sabha, the Minister said that the scheme was brought by an Act because of them (UPA Government), but I would like to say that MGNREGA’s misuse was also because of them.

“MGNREGA was infested with ghost accounts, its misuse was also to their credit,” Sitharaman said pointing towards the Opposition bench. At this, the Opposition members created an uproar.

It was a demand driven programme, meant to provide employment during lean season of agriculture. Slamming the Opposition, she further said: “We are now working towards creating it and using it properly with transparency,” she added.

Responding to comments regarding funds to the agriculture sector and subsidies to Fertiliser, she said that the government has ensured that burden does not shift to the farmer.

On doubling of farmers’ income, she said that this Budget has an increase of 6.6 times in expenditure of the Department of Agriculture from 2013-14 and Rs 68,000 crore has been provided for ‘Kisan Samman Nidhi’ through Direct Benefit Transfer.

The Minister also listed out the various monetary schemes and allocations being given to the Mico, Medium and Small Enterprises (MSME) sector in light of the pandemic. She also said that it was alleged that 67 per cent of MSMEs were shut but they (Opposition) failed to mention that those were temporarily shut due to the Covid induced lockdown and now they are currently afloat using credit guarantee schemes.

Talking about inflation, Sitharaman said that inflation management was an important job for finance ministries across the world.

“Since 2014, PM Narendra Modi has ensured that we keep our inflation contained…and it is every time brought back to being within 6 per cent and our management is robust,” she said, adding that the highest inflation this country had seen during 2010-14 when retail inflation was around 9 per cent in most of the months.