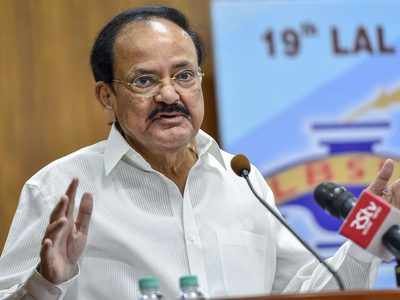 Rajya Sabha Chairman M. Venkaiah Naidu on Thursday expressed his happines over disruption-free House proceedings and hoped it continues throughout the session.
Soon after laying the papers on the table, Naidu said: “After a long time, the Rajya Sabha witnessed disruption-free proceedings yesterday. I was delighted to watch a quality debate on the Motion of Thanks to the President.”

“I hope that the spirit continues to prevail for the remaining part of this session,” he added.

The Chairman said that he has received a few notices on the Privilege Motion against the Union Information and Technology Minister and was examining them.

On Wednesday also, he urged the Members to have a productive Budget session, as 52.10 per cent of the proceeding time was lost to disturbances during the winter session.

The Chairman urged the MPs to ensure a productive Budget session taking place at the confluence of the historic 75th year of Independence and 70 years of electoral journey of free India.

He also highlighted the significance of the context of this session and urged all sections to ensure the best performance by reminding the Members of 93.50 per cent productivity during the Budget session last year.

Referring to the preceding monsoon session, he said that the loss of functional time of the House was as high as 70.40 per cent and termed the the trend of disruptions “highly disturbing”.

“I refer to the same with fervent hope that we all reflect on the same and conduct ourselves in a manner befitting the historic time that we are passing through,” Naidu said.