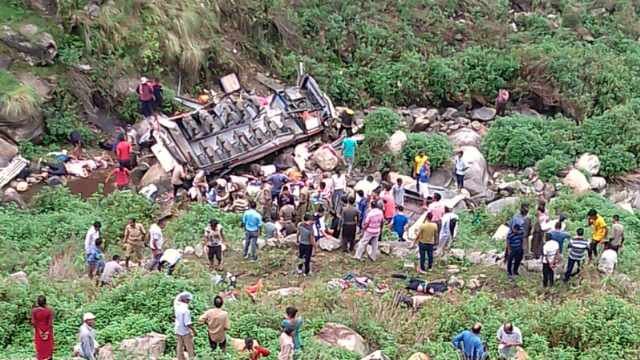 Fourteen people returning from a wedding were killed and two others injured when a vehicle fell into a deep gorge on the Sukhidhang-Dandaminar road in Uttarakhand’s Champawat district, police said on Tuesday.

The accident occurred at around 10 pm on Monday but the information reached the authorities by around 3 am and rescue teams were rushed to the spot, an official at the Champawat district disaster management office said.

Champawat Superintendent of Police Devendra Pincha told PTI that 12 bodies have been recovered and efforts to pull out the remaining two from the deep and narrow gorge are underway. The dead included five women and two children.

The injured are being treated at different hospitals in Tanakpur and Champawat, the SP said, adding the recovery of bodies is still underway at the site.

The pickup vehicle was returning from a wedding at a Dharamshala in Tanakpur to Danda Kaknai village when it met with the accident, he said.

Prime Minister Narendra Modi announced an ex gratia of Rs 2 lakh from the Prime Minister National Relief Fund for the next of kin of those killed and 50,000 for the injured.

Chief Minister Pushkar Singh Dhami has condoled the loss of lives in the accident.