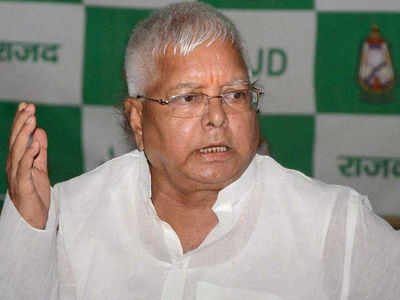 Rashtriya Janata Dal (RJD) chief Lalu Prasad Yadav completely quashed the speculation that he would step down from the post and son Tejashwi Yadav could take over as the next party president.

“Those who run such news reports are fools. We will get to know whatever happens,” Lalu Yadav told media persons in New Delhi when asked if Tejashwi Yadav will be made the national president of the party.

Earlier on Friday, RJD leader Tej Pratap Yadav also rubbished the talks of Tejashwi Yadav being made the party president, saying that Lalu Prasad Yadav will remain as the president as he had run the party well.

On the upcoming meeting of the national executive of the party, he said that a lot of important persons related to party organisation would be present. However, he did not confirm the participation of the former Chief Minister in the meeting.

The national executive meeting of RJD is scheduled to take place in Patna on February 10, which will be attended by the former chief minister of Bihar Rabri Devi, RDJ leader Tejashwi Yadav and other senior leaders. Lalu Parasd is also likely to attend the executive meeting.