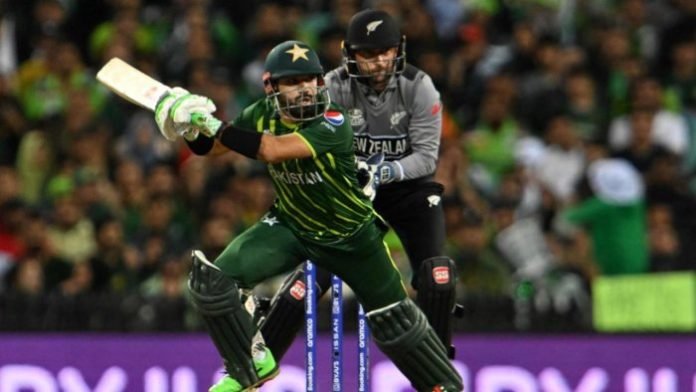 Pakistan’s comprehensive seven-wicket win over New Zealand in Sydney. They chased down the 153-run target with five balls to spare. They will face the winners of the second semi-final between India and England in Adelaide.

Pakistan’s biggest stars Shaheen Afridi, Mohammad Rizwan and captain Babar Azam, failed to perform throughout this tournament, they brought out their best at exactly the right time. Afridi led the way as Pakistan restricted New Zealand to a total of 152/4 after which Babar and Rizwan’s sensational 105-run opening stand knocked the wind out of the Kiwis’ sails. While the match went down to the last over, the run of play was hardly ever against Pakistan and they have gone through to the final for the first time since 2009, which was also the last time they won the tournament.

New Zealand were not up for this! It was a tame performance from them, they were probably 10 to 12 runs short with the bat, and then with the ball, their new ball bowlers just did not begin well. Boult especially as he leaked far too many runs in the Powerplay. The Kiwis were also quite uncharacteristic in the field as there were a few misfields and also a couple of dropped catches. They just succumbed to the pressure on the big stage and were beaten by a side that was well and truly better on the day.

From losing their first two games to storming into the finals! Pakistan’s journey this campaign has been unbelievable, this World Cup has been unbelievable. Pakistan had lost to Zimbabwe and now, they have beaten New Zealand so comprehensively in this semi finals. What a turn around for them. Brilliant.

Mohammad Rizwan is the Player of the Match. He says the conditions was tough for them but they have worked hard and believed in them and he is pleased they came good. Adds they wanted to attack, 150 was a good total but they wanted to make most of the Powerplay and then wanted to bat deep. States they just wanted to work hard and they would get the rewards.

Babar Azam, the captain of Pakistan says the team played really well and he thanks the crowd for the support they have given them. Adds they had a good start with the ball, the ball was not coming onto the bat and then later on Shadab and Nawaz continued the good work and they managed to finish well too and were pleased with 150. Informs they had a plan to go hard in the Powerplay and they wanted to make most of the first 6 overs. Credits the way Haris has played and says he is an aggressive player. Ends by saying they will enjoy this win but are focused on the finals and they are looking forward to it.

Kane Williamson, the skipper of New Zealand says they were put under pressure but they managed to get back the momentum. States they were outplayed but they are disappointed they did not make Pakistan work hard for their runs. Admits their fielding was not that great, Azam and Rizwan put them under pressure, they could have been more disciplined but Pakistan are deserved winners. Ends by saying there has been a lot of good cricket, they have played pretty well but they were not at their best but that is the nature of T20 cricket.