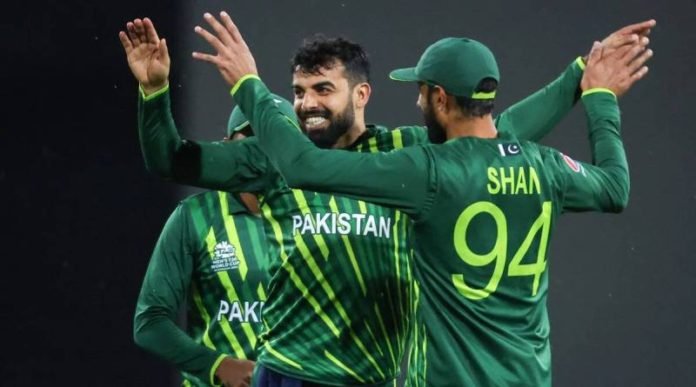 An absolute performance by Pakistan with the bat, ball and field. Pakistan kept picking wickets at regular intervals throughout the innings. Shadab Khan both with the bat and ball was amazing today. He turned the game in both innings. In the ninth over the leg-spinner picked up two crucial wickets from Temba Bavuma 36(19) who was looking in good touch at the time along with Aiden Markram 20(14) who is in good form. This in turn affected the DLS score required of the side after the rain break.

Earlier in batting Pakistan was in trouble with 47/4. Iftikhar Ahmed 51(35) first with Muhammad Nawaz 28(22) steadied the ship with a 52-run partnership for the fifth wicket. Then Shadab Khan 52(22) and Iftikhar took the South African bowling apart with an 81-run partnership for the sixth wicket in just 35 balls. The proteas kept dropping their chances which didn’t help either.

Shadab player of the match said, “I have played (batted) like this in PSL, but this is a World Cup match, so it’s my best innings. The pitch was a bit slower compared to Perth. I tried to bowl at the stumps, and it paid off. I like to bat up the order, but it depends on the situation and what the team requires, so I am ready to bat anywhere.”

Babar Azam said, “Very happy the way team performed. We are not upto the mark – me and Rizwan. But the way Haris played – different player – set the momentum. And the way Shadab and Ifti finished the innings – outstanding. To be honest, everyone is my best player.”

Temba Bavuma said, ” Quite disappointing the way we ended our bowling session. Getting them 5 down quickly and allowing them to get to a formidable score. Lots of questions we need to ask. Credit to them. We knew that the weather was going to be a bit of an issue. I’m no bowler but the bowlers do practice for these conditions.”

As standings go in Group 2, India is placed at the No. 1 position with 6 points in 4 games. Their only loss came against South Africa. Second on the points table is South Africa, with 2 wins and 1 No-Result from 4 matches.

With the win over South Africa, Pakistan has climbed up to the 3rd spot in the standings, with 2 wins from 4 matches. Bangladesh, Zimbabwe and Netherlands take the 4th, 5th and 6th spots respectively.

India: A victory over Zimbabwe in their final group game would see India take the group-winner spot and qualify for the semi-finals. A defeat can also see them through if South Africa loses their last match. In case South Africa win and India lose their respective final games, then India would have to depend on Bangladesh beating Pakistan by a narrow margin so that India can then trump Shakib al Hasan’s side on NRR.

South Africa: Presently on 5 points, South Africa only needs to win their last match to qualify. If they lose, they will be out of Pakistan vs Bangladesh match produces a result. If it rains in South Africa vs Netherlands match, the equation will be down to NRR.

Pakistan: For Pakistan to qualify, they have to beat Bangladesh in their last match and also hope that either South Africa loses against Netherlands or sees their match gets washed out. A defeat for India in the final match against Zimbabwe will also see Pakistan go through as their NRR is better than the Indians.

Bangladesh: With the worst run rate of the group, Bangladesh’s qualification chances are pretty slim. They need to first beat Pakistan in their last match and hope that South Africa suffers a defeat against Netherlands. Even if India loses their last match to Zimbabwe, Bangladesh isn’t expected to go through because of a huge difference in NRR.

Zimbabwe and Netherlands are not in the running for the semi-finals.