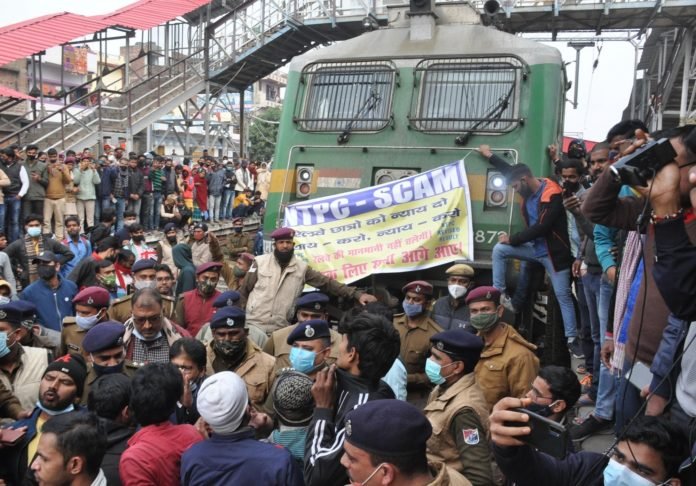 The Bihar Bandh called by the students in protest against “irregularities” in the Railway Recruitment Board (RRB) exams affected normal life on Friday as a large number of students and political party workers blocked rail and road traffic at several places.

The bandh is being supported by several ruling and opposition political parties, including VIP, HAM which are in power in the state. Besides, RJD, LJP (R), JAP, AIMIM and Congress parties are extending complete support to the agitating students.

A large number of students and RJD supporters headed by Mukesh Raushan blocked the busy Mahatma Gandhi Setu at Hajipur on Friday morning leading to a huge traffic snarl on the bridge connecting Patna to Hajipur on the Ganga river. Tyres were also burnt on the road.

In Jahanabad, students blocked busy NH 83 in the morning hours. They burnt tyres on the road thus disrupting the traffic movement.

As Railways Minister Ashwini Vaishnaw considered two demands of the students, the teachers of coaching centres are appealing to students to stay calm during the bandh.

Khan Sir, who is booked under relevant IPC sections for provoking the students, said: “The railway ministry has met the demand of students. Hence, students should not take laws in their hands and protest violently. The teachers of the coaching centres are not with the bandh. Stay focused on study.”

The student protests are by and large hijacked by different political parties of the state.

“I condemn the police lathi charge on students in Bihar. The demand of students is genuine and logical. Hence LJP (R) is in the support of students. Peaceful protest is the birth right of students in democracy,” said Chirag Paswan, president of LJP (R).

The railways has cancelled several trains bound to Delhi, Kolkata, Mumbai and some passenger trains and intercity express trains amid the ongoing protests.

The student protest started last Saturday after RRB issued fresh notification for another examination and also said that the students have to give two examinations in the form of preliminary and mains in future.

The fresh notification has provoked students for undeclared protests. They claimed that notification of 35,000 jobs of various posts in Indian railway and NTPC was given in 2019 and exams were also conducted. Many students have passed the examinations and were waiting for the posting when fresh notifications came in.