Pujara, Rahane Might Just Have Only One More Innings To Save Their Test Careers, Says Gavaskar 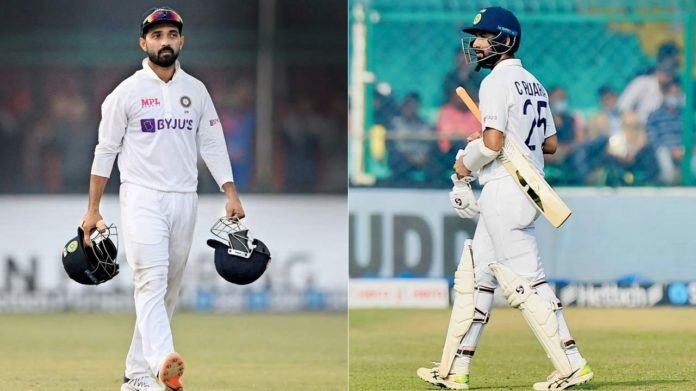 Former India captain Sunil Gavaskar has said that India’s struggling veteran pair of Cheteshwar Pujara and Ajinkya Rahane might just have one more innings “to save their Test careers”. Gavaskar said this on commentary after both Pujara and Rahane departed in consecutive deliveries off the bowling of Duanne Olivier during the first session’s play on day 1 of the second Test match between India and South Africa in Johannesburg.

Pujara was dismissed for 3 off 33 deliveries when Olivier bowled a short-of-length delivery outside the off stump, which caught the shoulder of Pujara’s bat. The ball lobbed in the air and Temba Bavuma completed an easy catch at point. It looked like a lethargic attempt from a batsman who is low on confidence.

On the very next delivery Rahane’s tentative push outside the off stump was caught in the third slip by Keegan Petersen. He was out for a golden duck.

Gavaskar hinted that there have been questions raised about their place in the playing XI after repeated failures and the second innings in this match could be their last chance to show they deserve to play ahead of in-form players like Shreyas Iyer.

“After those two dismissals one can say that they probably have just the next innings, both Pujara and Rahane, to save their Test careers,” Gavaskar said.

“There have been questions asked about their place in the team and now with these two dismissals they have just one innings left. If there is another innings and the way India is going, it looks like there will be another for them to score something and maybe keep their place in the team,” the former India captain further said.

Hanuma Vihari replaced captain Virat Kohli in the playing XI for the second Test after Kohli was ruled out due to an upper back spasm.

Pujara has not scored a Test century since January 2019, while Rahane’s form has been poor to say the least over the past year or so.