Parivarvadis Spreading Venom In The Name of Caste: PM Modi 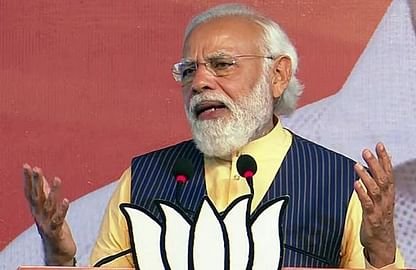 Linking the Samajwadi Party’s election symbol ‘cycle’ to the 2008 Ahmedabad serial blasts, Prime Minister Narendra Modi on Sunday alleged that some parties are sympathetic to terrorists.

“They had kept the bomb on the cycle. They had parked the cycle where the people sell vegetables…The blasts took place on the cycle. I am surprised why did they choose the cycle,” Prime Minister Modi said.

“We have to be alert always from such people, such political parties,” he added addressing the ‘Vishal Jan Sabha’ in Uttar Pradesh’s Hardoi.

Continuing his diatribe, Prime Minister Modi said “these people also put the country at stake for their selfishness for the chair”.

“They also play with the country’s security,” he added

Prime Minister Modi said that he maintained silence for so many years because the Ahmedabad blast case trial was going on.

“Today when the court has sentenced the terrorists, I am now raising the matter in front of the country. And today I will also praise the Gujarat Police for their efforts to eliminate many modules of the terrorists,” he added.

Attacking the rivals, Prime Minister Modi said the people of Hardoi have seen how these people when in power gave a free hand to those using ‘Katta’ (pistols).

Prime Minister Modi said these “parivarvadis” are now “spreading venom in the name of caste”.

“Such people fight with their own family for the chair. The double engine government you voted for doesn’t belong to any family, nor the government at the Centre belongs to any family,” said Prime Minister Modi.

“Our govt is for the poor, farmer and youth,” he added.

Reaching out to the voters, Prime Minister Modi said: “Your excitement and enthusiasm are a blessing for all of us. We all know the association of the holy festival of Holi with the divine land of Hardoi. I know this time the people of Hardoi and UP have made preparations to play the colourful festival of Holi twice”

“The first Holi will be celebrated on March 10 with the bumper victory of the BJP. But if Holi is to be celebrated with great pomp on March 10, then preparations for it will have to be done at the polling booths now,” he added.

“You have also taken the responsibility for the next phases of the elections in UP. Those doing politics of appeasement and stopping our festivals will get the answer of the people of UP on March 10,” he added.

Prime Minister Modi said the goons used to roam freely across Uttar Pradesh five years ago, adding the people of the state were petrified due to the same.

Continuing his diatribe, Prime Minister Modi said that only 34,000 toilets were built for the poor during the earlier regimes.

“But after the arrival of Yogi ji, 5 lakh toilets were built…Where did the money (for construction of toilets) go?” he asked.

Meanwhile, polling for the third phase of the assembly elections is progressing smoothly in Uttar Pradesh. The voter turnout till 1 p.m. was 35.88%.

There are 627 candidates, including 97 women in fray, for 59 seats included in this phase.

During the 2017 assembly elections, the BJP bagged 49 out of the 59 seats going to polls in the third phase, while the Samajwadi Party won eight seats and the Congress and the BSP got one seat each.

In all, 25,794 polling stations have been set up in the concerned constituencies for their convenience.

The Trinamool Congress has announced support to the Samajwadi Party, but decided not to field its candidates in the polls.

The Congress and the Bahujan Samaj Party have announced to go in for the upcoming polls without any alliance.

The Janta Dal (United) is contesting the polls independently in the state.

Voting for the 403-member Uttar Pradesh Assembly is being held in seven phases from February 10 to March 7.

The counting of votes will be held on March 10.