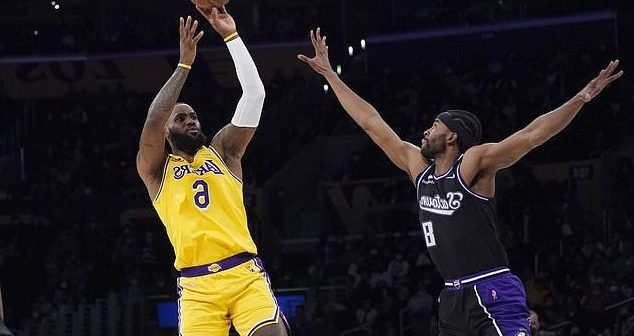 LeBron James scored 14 of his 31 points in the fourth quarter, Malik Monk added 11 of his 24 in the final seven minutes, and the Los Angeles Lakers held off the Sacramento Kings 122-114 on Tuesday night for their fourth win in five games.

Talen Horton-Tucker scored 19 points for the Lakers, who rallied from a late seven-point deficit with one big basket after another from Monk and James. Monk hit six 3-pointers in yet another impressive offensive game, and Russell Westbrook added 19 points and drew a key late charge as the Lakers climbed back above .500.

Westbrook played 34 minutes in his first turnover-free game since March 14, 2016.

De’Aaron Fox scored 30 points and Buddy Hield added 26 with seven 3-pointers for the Kings, who scored 11 consecutive points early in the fourth quarter before wilting down the stretch. Harrison Barnes had 14 points for Sacramento, which had won three straight over the Lakers in Los Angeles.