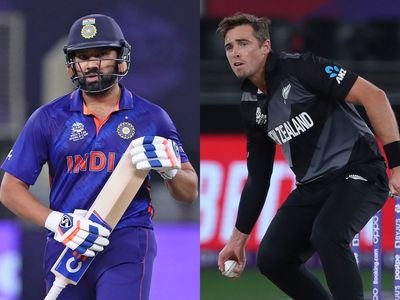 India finished off the game with seven wickets in hand to clinch the three-match series 2-0 against New Zealand in Ranchi at the JSCA International Stadium Complex.

Chasing a target of 154 runs, KL Rahul and Rohit Sharma put on a century stand for the first wicket to give Team India a solid platform to overhaul the visitor’s target. Rahul departed for 65 runs while Rohit played a memorable knock of 55 before getting dismissed.

Earlier, opting to bowl first, Indian bowlers restricted New Zealand to a total of 153/6 in 20 overs, despite an electric start from opener Martin Guptill, who surpassed Virat Kohli in the list of highest run-getters in T20Is.

Guptill was dismissed for 31 by Deepak Chahar and the Indian spin duo of Axar Patel (1/26) and Ravichandran Ashwin (1/19) tightened the screws on the Blackcaps thereafter.

Debutant Harshal Patel starred with the ball as he picked up the wickets of Daryl Mitchell and Glenn Phillips to further dent Kiwis’ progress. Bhuvneshwar Kumar and Deepak Chahar were taken for plenty in the powerplay but came back strong as India didn’t allow New Zealand to post a big total.