Gujarat Election: Will BJP Be Crowned Again Or Will The People Elect A New King? 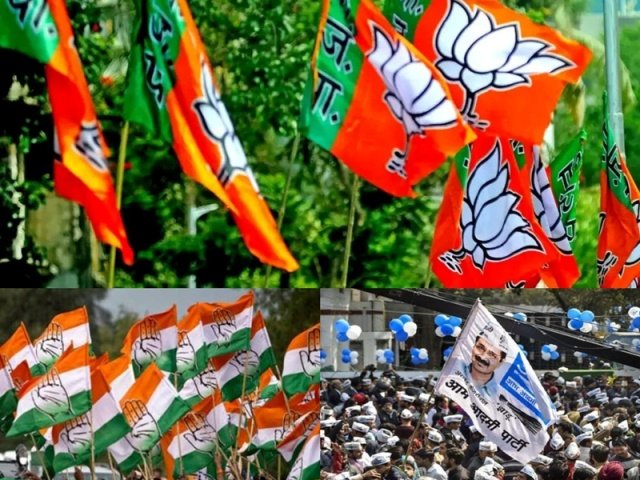 In Gujarat, BJP wants to retain the government. But this time with the arrival of the Aam Aadmi Party, difficult to say anything conclusively as to which way the wind is blowing.

What could have otherwise been a straight fight between the BJP and Congress has now become a triangular contest with AAP’s entry. Nonetheless, the ruling BJP still hopes to make a comeback despite all its shortcomings in terms of governance.

However, the entry of Arvind Kejriwal’s AAP has proved to be an irritant for both the BJP and Congress. This election in Gujarat, therefore, is very different from others. However, it still has the same sound bytes, rhetoric, campaign speeches, and poll issues appearing to have captured the pulse of voters.

The otherwise tumultuous Gujarat politics since its formation in 1960 – no chief minister has survived the full term except Madhavsinh Solanki and Narendra Modi – hasn’t seen a third player succeeding. But, for now, AAP has generated a perception that it can possibly become a spoilsport for traditional political rivals, the BJP and Congress.

Ahead of others in the fray, the AAP on Friday announced former well-known Gujarati TV journalist Isudan Gadhvi as its chief ministerial face. It has also finalised candidates for 102 constituencies.

AAP supremo Arvind Kejriwal first began with the rural hinterlands of Gujarat expecting to eat into the Congress base since as many as 66 urban constituencies in eight major cities and their peripheries are the BJP’s fiefdom as well as the fact that Narendra Modi’s Hindu Hriday Samrat image dwarfs even burning issues in the cities and towns.

Kejriwal has been leveraging his time-tested formula of quality education and healthcare plus free electricity, among a slew of freebie promises to several sections of class III and IV government staff, including police personnel, who have all been agitating against the BJP government largely over the contract and outsourcing system.

This generated a huge response in favour of AAP, raising an alarm in the BJP camp. For instance, within minutes of the AAP chief announcing during an agitation by families of police staff for revised grade pay that his party would ensure that Gujarat has the best-paid force in the country, the DP (display picture) on WhatsApp platform of hundreds or even more police constables had Kejriwal’s picture.

Interestingly, though the AAP has by design avoided any references to the Muslim issue or the Bilkis Bano case, many from the minority community are believed to have been drawn towards the party more because of Kejriwal’s free electricity, mohalla clinics and education rhetoric.

There is another change this time around. The Congress party has been invisible throughout the campaign, creating a perception that it is giving a walkover to the BJP or AAP.

In sharp contrast to the Congress’ aggressive campaign led by Rahul Gandhi in 2017 – with the young force of Hardik Patel, Alpesh Thakor and Jignesh Mevani – the party is silently scrounging the ground. This time around Rahul Gandhi so far has been absent from the campaign. With the pressure mounting from Gujarat Congress leaders, he is expected to address one or two large rallies in the state after November 10, taking a break from his Bharat Jodo Yatra, which is currently passing through Telangana.

Interestingly, it is none other than Narendra Modi who not only identified this strategy but also spoke about it at a public meeting last month, exhorting his partymen not to discount the Congress that was working quietly on the ground and had outsourced the sound bytes, the criticism, and the allegations to the AAP.

What exactly is Congress doing through its silent campaign?

The party is working on its back-to-basics theory of KHAM (Kshatriyas, OBCs, Harijan, Adivasi, Muslim) which helped the party win 149 seats in 1985, and 139 in 1980 – the year when Indira Gandhi cleared her Emergency cobwebs to bounce back.

The party is relying on a host of leaders belonging to the aforementioned communities. After Amit Chavda, an OBC Kshatriya with limited clout, as the state president, the party handed over the responsibility to Jagdish Thakor, who is also an OBC Kshatriya leader from the critical North Gujarat region. Both the party and Thakor himself have put the past behind them of an episode when the latter was humiliatingly marginalised in favour of Alpesh Thakor, who ditched the party to embrace the BJP in 2019.

On the other hand, the party has also been throwing its weight behind young and dynamic Paresh Dhanani, a Patidar leader who snatched power from the BJP in Saurashtra’s Amreli district. Barring the 2002 assembly polls, he has been winning from there consistently.

The Congress now has an Adivasi leader, Sukhram Rathwa, from central Gujarat as the Leader of the Opposition. The party’s firebrand young tribal leader from South Gujarat Anant Patel has emerged as a force to reckon with after massive Adivasi protests led by him forced the Union and the state governments to scrap the Par-Tapi-Narmada Riverlinking Project. This is another first in the 2022 campaign – a movement led by the Congress forcing the Modi government to halt a project considered close to the prime minister.

Senior Scheduled Caste MLA from Ahmedabad’s Danilimda constituency, Shailesh Parmar, continues to be the Deputy Leader of the Opposition. The party has firebrand Dalit leader Jignesh Mevani as one of the working presidents along with another committed Scheduled Caste leader and sitting MLA Naushad Solanki.

A key OBC constituency is the Koli Patel community, which has a huge voter base of 24%. While Ritwik Makwana has been made a working president, Punjabhai Vansh has been elevated as chairman of the Public Accounts Committee in the State Assembly.

As for the Muslims, who comprise 9% of the population in the state, the Congress has three sitting MLAs in the form of Imran Khedawala and Gyasuddin Shaikh from Ahmedabad city, and Mohammad Javed Peerzada, a former school teacher, who is a three-time MLA from Wankaner in Saurashtra. Peerzada lost his first election in 2002, however, after that he has been winning from here.

By trying to cultivate the above-mentioned communities and their tallest leaders, the Congress has been careful not to get caught in the cacophony of social media, where the AAP and BJP are widely known to have an upper hand over the grand old party.

In Gujarat, the survey predicted that the BJP may win 119 out of 182 seats while Congress is likely to win 59 seats. AAP, which is aggressively campaigning in Gujarat, may not get much traction and could end up with just two seats.

The Gujarat Assembly elections will be held in two phases on December 1 and 5, and the results will be declared on December 8. Of the 182 seats in the Legislative Assembly, 89 will go to polls in the first phase and 93 in the second. There are over 4.9 crore electors eligible to vote this year. There will be more than 51,000 polling stations set up, including more than 34,000 in rural areas.