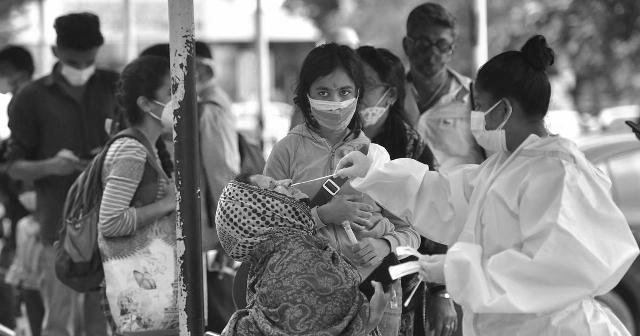 India reported 4,417 new coronavirus infections, the lowest in the last three months, taking the tally of COVID-19 cases to 4,44,66,862, according to the Union health ministry data updated on Tuesday.

Active Covid cases have declined to 52,336, while the death toll has climbed to 5,28,030 with 23 fatalities, including one death reconciled by Kerala, the data updated at 8 am.

The active cases comprises 0.12 per cent of the total infections while the national COVID-19 recovery rate has increased to 98.69 per cent, the health ministry said.

The death toll due to the virus was 4,783 as no fresh death was reported from the union territory, he said.

There are 733 active cases of the disease in the union territory, while the number of recoveries has reached 4,72,899, the official said.

The official said there were 51 confirmed cases of mucormycosis (black fungus).

Madhya Pradesh on Tuesday reported 32 COVID-19 cases, which raised the tally to 10,53,705 while the death count remained unchanged at 10,770, a health department official said. The positivity rate stood at 0.7 per cent.

Director of Health G Sriramulu in a release said, the 62 new cases surfaced during examination of 1,057 samples in the last 24 hours ending 10 AM today. While Puducherry region accounted for 54 new cases out of the 62, Karaikal and Yanam regions registered four cases each.

Mahe, an enclave of Puducherry in Kerala did not register any fresh case, the Director said.

A total of 251 patients recovered during the last 24 hours and the overall recoveries were 1,70,874. While six patients were in hospitals, the remaining 245 in home quarantine.

There was no fresh fatality during the last 24 hours and the death toll remained at 1,969.

Sriramulu said the test positivity rate was 5.87 per cent while fatality and recovery rates were 1,14 per cent and 98.72 per cent respectively.

Mumbai on Tuesday reported 285 new coronavirus cases, but no fresh death linked to the infection for the first time since August 22, while 516 more patients recovered in the metropolis, said the local civic body. With this, the tally of COVID-19 cases rose to 11,46,725, while the death toll remained unchanged at 19,711, said the Brihanmumbai Municipal Corporation (BMC) in a bulletin.

Mumbai’s overall tally of recuperated patients rose to 11,24,474 after 516 more people recovered from the respiratory illness, said the BMC.

The financial capital has reported zero death linked to the viral infection for the first time since August 22.

The metropolis has a coronavirus recovery rate of 98.1 per cent and is now left with 2,540 active cases, the bulletin said.

The growth rate of COVID-19 cases in Mumbai stood at 0.034 per cent between August 30 and September 5, while the case doubling rate was 2,094 days, it added.

Himachal Pradesh reported 72 fresh COVID-19 cases on Tuesday, pushing the state’s infection count to 3,11,413, an official said. So far, the infection has claimed 4,182 lives in the state.

On the bright side, 99 more patients recovered from the infection, the official said.

The number of active coronavirus cases stands at 521, he added.

Meanwhile, A nasal vaccine against Covid-19, developed by Bharat Biotech, has been approved by the drug controller, for “restricted use” among adults “in emergency situation”, said Union Health Minister Dr Mansukh Mandaviya.

In February, in what was the country’s first such anti-Covid drug, Mumbai-based Glenmark launched a nasal spray (branded FabiSpray) in partnership with SaNOtize, for treatment of adult patients.

The company got manufacturing and marketing approvals from the Drugs Controller General of India for its Nitric Oxide Nasal Spray as part of an accelerated approval process. “Phase 3 trial in India met the key endpoints and demonstrated reduction of viral load of 94 per cent in 24 hours and 99 per cent in 48 hours,” the official statement said.