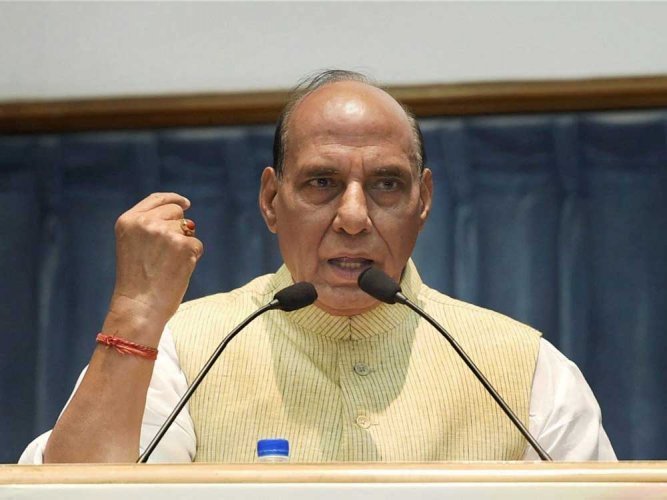 Defence Minister Rajnath Singh on Monday said that the Centre is ready to talk with the militant outfits of the Northeastern region to resolve their problems as the government always wants to end the violence permanently.

Addressing an election meeting at Langthabal Mandal in Imphal West district of Manipur, the Defence Minister said that the government is always prepared to talk with the extremist outfits for a lasting solution of the insurgency problem and to stop violence in Manipur and other Northeastern states permanently.

“The terror outfits must come forward to talk with the government to resolve their problems. Violence has to be stopped permanently to undertake the developmental projects and welfare schemes for the benefit of the people. The terror violence has been largely controlled in Manipur under the dynamic leadership of Chief Minister N. Biren Singh,” Singh said.

The senior BJP leader said that during the previous Congress regime, blockade and violence were the regular phenomenon and the records of their (Congress) governance were broken.

“The BJP wants to take Manipur’s developmental status to a new height within 15 years. After Narendra Modi became Prime Minister, the face of Manipur has been changed and the state is going forward to achieve a new future. Modi has a new vision for the all round development of the Northeastern region. The projects relating to rail, road and air connectivity are being implemented with the mission mode,” said the former National President of BJP.

The Defence Minister said that the Northeastern region will be made a big tourism hub and Manipur’s development through tourism would be tremendous.

Saying that the Congress neglected the Northeastern region for decades, he claimed that the development of Manipur is now at par with the other parts of the country.

The veteran saffron party leader during his maiden election campaign in the poll-bound state said that the BJP would get a clear majority in the upcoming Assembly elections. Singh, while highlighting various welfare schemes of the Central government, said that earlier a negligible amount of the central funds reached the people but now 100 per cent of the central financial aids are directly reaching the people.

The elections to the 60-seat Manipur Assembly would be held in two phases on February 28 and March 5. The counting of votes would take place on March 10.

The Defence minister later visited the house of Indian Army soldier, Yumnam Kalleshor Kom, who was martyred during the Kargil War in 1999.

“Met with his family members and enquired about their well-being. I salute the courage and supreme sacrifice of YK Kom,” he tweeted.