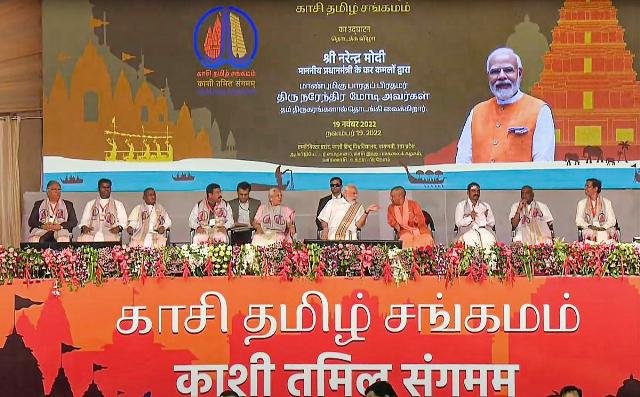 On Saturday (19 Nov) Prime Minister Narendra Modi inaugurated the month-long Kashi Tamil Sangamam in Varanasi, which is meant to serve as Bharatiya Janata Party’s entry into Tamil Nadu. The Varanasi event could have a tremendous political impact thousands of kilometers away in Tamil Nadu.

The BJP is using the cultural heritage of Tamil Nadu in an aggressive way, which has put the state’s ruling party, Dravida Munnetra Kazhagam, and its allies in a tough spot.

While Modi’s speech at the function would boost Hindutva followers as he quoted Tamil scriptures, the speech of Uttar Pradesh Chief Minister Yogi Adityanath, in which he claimed that “both Sanskrit and Tamil originated from Lord Shiva”, has already evoked controversy in Tamil Nadu.

Both PM Modi and CM Adityanath bowed before the religious leaders from Tamil Nadu who sat on the stage. The video and photos of them are doing rounds in the state. Moreover, 2,500 school/college students from all districts of Tamil Nadu will be travelling to Varanasi in special trains for the event, a collaborative effort of the Indian Institute of Technology-Chennai and Banaras Hindu University. Music maestro Ilaiyaraaja performed in an orchestra taking stanzas from Rudram’s mantra.

BJP and its leaders are relying on Tamil culture to make inroads into the state. And it is paying dividends as well. The ‘Look South’ policy of BJP is to go on the offensive, a decision taken at the Hyderabad National Executive. Since May 2022, Modi has visited Tamil Nadu four times. Union Minister Amit Shah makes it a point to touch down in at least one Tamil Nadu district whenever he visits any southern state. What does it indicate? The carpet bombing style of 45 central ministers zeroing in on Tamil Nadu, hopping up from one district to another, is reminiscent of its 2019 ‘Look East’, through which the BJP managed to win Tripura and some seats in West Bengal. Its strength in Lok Sabha received a boost of 25 MPs from the east. Now, in 2024, the BJP is keen to replicate its success with a ‘Look South’ policy.

The picture on the other side is rather gloomy.

Chief Minister and DMK present M.K. Stalin said last month that the actions of some of his party leaders were giving him “sleepless nights”. “Every morning I get up with the hope that our people would not have created any trouble. Sometimes, I am not able to sleep. You can realise it by seeing my body and health condition,” he reportedly said.

It’s a remark on DMK’s internal strife. Sharp criticisms are hurled against each other, an example of which was seen recently.

Tamil Nadu Finance Minister Palanivel Thiaga Rajan said that the co-operatives department lacked transparency and that he was not satisfied with its functioning. Minister for Cooperation I Periyasamy hit back, saying that the people of Tamil Nadu are satisfied.

The DMK is also grappling with dynast issues. Stalin’s son Udhayanidhi allegedly holds influence over the younger section of DMK ministers. And there have been reports that Stalin would induct him into the government soon. This could likely cause resentment among the old timers in the party. The 2024 Lok Sabha election and the 2026 Tamil Nadu assembly election will be testing times for the DMK.

The AIADMK is in deep trouble. After the death of Jayalalithaa, the party has been split into several factions. Its current situation is similar to Shiv Sena’s, where two factions are fighting for the ‘bow and arrow’ election symbol.

Both Shiv Sena and AIADMK are looking for relief from the Election Commission. Needless to say, the arm-twisting of these two parties by the BJP can’t be ignored.

DMK General Secretary Durai Murugan said in a public meeting that the BJP’s growth in Tamil Nadu is not good for Dravidian politics. The politics of Tamil Nadu is now taking an interesting turn.

With stalwarts like Jayalalithaa, Karunanidhi no more in Tamil politics, Rajinikanth taking sanyas from spiritual politics, Kamal Hassan’s political career unable to take off, the BJP seems ready to fill the space. It seems all is going well for the BJP and its ‘Look South’ policy is on the right track.