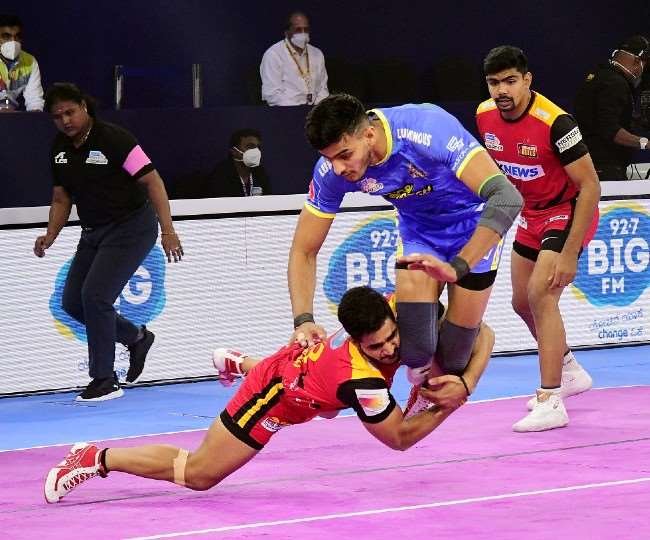 Pawan Sehrawat picked up 9 points and was ably assisted by his raiding partners Chandran Ranjit (7 points) and Bharat (5 points) as the Bulls recovered from their Day 1 loss to win the Southern Derby against Tamil Thalaivas on Christmas eve.

The first half started with both defences looking strong and keeping a high line. Bulls’ Pawan Sehrawat and Chandran Ranjit struggled to escape the strong arms of Thalaivas defenders. At the other end, K Prapanjan and Manjeet had a tough time against the Bulls defence left by Aman in the left corner.

The game’s changing point in the first half was provided by Bharat, who took over the raiding duties of the Bulls after their top 2 struggled. His lanky army and reach caused troubles in the Thalaivas defence and helped the Bulls secure an ALL OUT in the 18th minute. The first half ended 19-13 with Bengaluru in the lead.

Kabaddi is a game of momentum and Tamil Thalaivas ensured it remained with them in
the early minutes of the first half. Surjeet Singh and Sahil Singh produced stellar tackles
on the Bulls raiders as raider Manjeet helped Thalaivas secure an ALL OUT in the 4th
minute of the half and take the lead.

The teams traded blows and the scores were tied 21-25 with just 10 minutes in the
match. But a combination of successful tackling and brave raiding by Chandran Ranjit
gave the Bulls an ALL OUT with 7 minutes remaining to open up a 5-point lead. Despite
Bhavani Rajput’s valiant efforts with his raids, there was no comeback for Thaliavas. Bulls defender Saurabh Nandal secured his High 5 (5 tackle points) in the last move of the game.