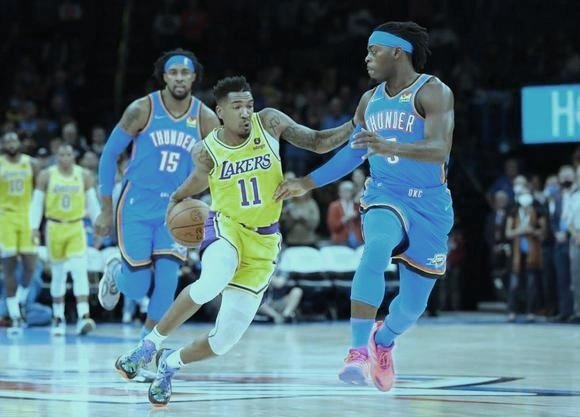 Shai Gilgeous-Alexander scored 11 of his 28 points in the fourth quarter and the Oklahoma City Thunder overcame a 19-point deficit to beat the Los Angeles Lakers for the second time this season, 107-104 on Thursday night.

The Thunder haven’t beaten anybody in their eight games this season except the vaunted Lakers – both times while rallying from enormous deficits, and both times with LeBron James sidelined. James sat out the rematch with an abdominal strain.

Anthony Davis had 29 points and 18 rebounds despite spraining his right thumb near halftime. Russell Westbrook scored 27 but had a late turnover and missed an overtime-forcing three at the buzzer. Carmelo Anthony had another big game off the bench, scoring 21 points with five 3-pointers – including two in the final minute while LA’s rally fell short.