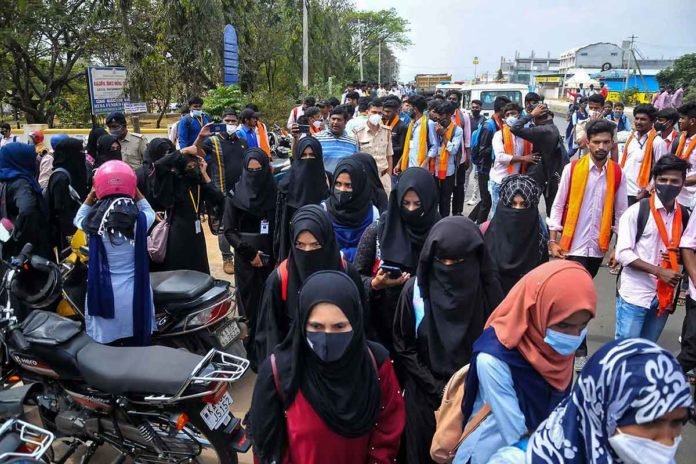 At least 58 female students from a college in Karnataka’s Shivamogga district were suspended on Saturday for wearing hijab and also staging an agitation demanding that they should be allowed to attend classes.

The students were from the Government Pre-University College of Shiralakoppa.

Although the college management, development committee tried to explain to the hijab-clad students the interim order of the High Court, they did not listen and pressed for wearing of the hijab, according to the principal.

Hence, they were suspended from the college temporarily.

The enraged students got into arguments with college authorities, leading to an intervention by the police to disperse them.

While the administration of Vijay Para-Medical College in Belagavi has declared a holiday for an indefinite period due to the protests, students of the SJVP College in Harihara boycotted classes after being denied entry to classrooms for wearing hijab.

Hijab-clad students also gathered in the playground of the Ballary Saraladevi College after they were turned out from classes. They refused to speak to the police and in turn asked not to be disturbed.

In Kodagu, hijab-clad students staged a protest holding placards before the gate of the college.

In a statement, state Home Minister Araga Jnanendra said: “The hijab row is not in all colleges. Very few colleges are facing the agitations and they are being warned. Section 144 has been clamped in the surrounding areas of the colleges.”

Those who have violated it have been arrested and FIR has been lodged against many, he added.

The Minister further said there were communal forces behind the row who have been warned and cases were lodged against them.

If someone says constitution and court can be ignored, they will not be spared, he stated.

He stated that on Friday, minority community legislators submitted a memorandum to him regarding hijab row. “I have told them that school should have uniformity. I have asked them that jointly we should overcome this situation.”

Meanwhile, Chief Minister Basavaraj Bommai said that he would get all the details regarding hijab row.

Education Minister B.C. Nagesh has said that Muslim community leaders are with the interim order issued by the court. “We will continue to explain to people about the interim order regarding hijab row and most of them are following the order. There is propaganda which is trying to put religion over education,” he said.