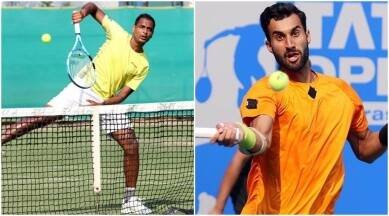 Ramkumar Ramanathan gave a robust start, and Yuki Bhambri built on it with a quality fight against Denmark No.1 Mikael Torpegaard, as the host jumped on to the driver’s seat with a 2-0 lead in the Davis Cup World Group play-off tie on the grass courts of the Delhi Gymkhana Club on Friday.

With a near capacity crowd providing a vibrant atmosphere and the grass playing as expected, it came down to execution of the plan, which was done in a commendable fashion by Ramkumar and Yuki, amidst all the buzz and contrasting performance of the opponents.

Ramkumar was so solid, especially with his serve that he did not face a single breakpoint in the hour-long match, or give any chance for Sigsgaard.

‘’I had good feel on the serve’’, said Ramkumar, asserting that years of experience had helped him stay focused and play to potential when required.

Yuki was happy to subdue a talented opponent who was blowing hot and cold. After an initial exchange of breaks of serve, Yuki broke decisively in the ninth game and served out the first set, saving two break points.

Into the second set, Yuki went up 4-0 when Torpegaard gave a glimpse of his big game, but it was too late to catch up.

‘’I was confident, and when he went for broke, I was able to raise my game’’, said Yuki, happy to have played well on grass, adapting to the demands of the situation, and grateful to Ramkumar for getting the 1-0 cushion.

While the Indian camp was toying with the idea of ‘’going for the kill’’, with the recently successful pair of Rohan Bopanna and Ramkumar playing the first doubles on Saturday, the Danish captain Frederik Nielsen stressed that his team was ‘’pretty far from being out’’.

Captain Rohit Rajpal was delighted with the performance of the two boys, especially with the way Yuki closed out the match against the tricky Torpegaard.

‘’The first set was tight for Yuki, but that is when his class came into play. The 2-0 lead takes a lot of pressure off the team’’, said Rohit, emphasising that the team would take a final call on the doubles combination, even though he had instinctively responded on international television that Bopanna would pair with Divij Sharan as per the original nomination.

Denmark would look up to its captain Nielsen, Wimbledon doubles champion in 2012, to infuse some life into the contest.