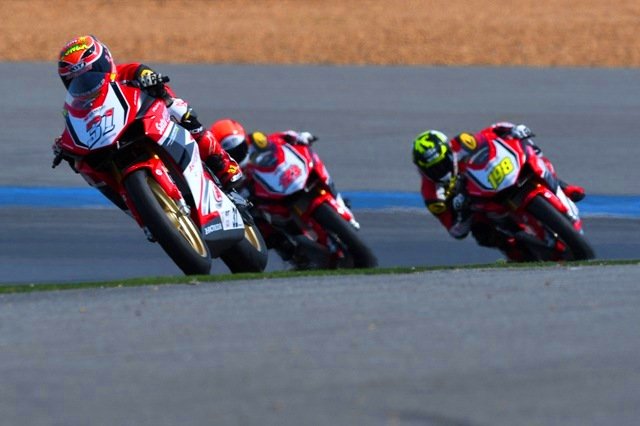 As Asia’s toughest road racing championship draws to a close this weekend, Honda Racing India’s duo of Rajiv Sethu and Senthil Kumar have reached Chang International Circuit in Thailand for the final battle of the 2022 Asia Road Racing Championship (ARRC).

The Honda Racing India Team enters this round among the Top 9 of the total 14 teams in the Asia Production 250cc (AP250) class. Showing consistent improvement since its debut as a solo Indian team in 2018, the team has worked extensively on gaining valuable points – climbing from 6 points in its inaugural season to closing the 2019 season with 35 points. On a constantly improving path, the team now enters the 2022 finale with a total of 42 points.

Honda racing India’s experienced rider Rajiv Sethu enters the last round of the AP 250 class with a total of 31 points under his belt. For Rajiv, Chang International Circuit holds a history of good performances. In 2018, he scored his maiden international point here.

It was here that Rajiv secured the Top 7 qualifying finish – the first time by an Indian rider, during the 3rd round of ARRC in 2019. His steady performance in round 1 of the 2022 season earlier this year resulted in an 11th-place finish. Rajiv is already in the top 15 out of the 24 riders in AP250 class and is determined to further up his ante this weekend.

Meanwhile, Rajiv’s teammate Senthil Kumar is the most familiar with this track. It was at Chang where he made his international debut with the Thailand Talent Cup and finished in the Top 20 in round 3 of 2019 ARRC. In round 1 of this season, he powered through and outpaced other international riders in the championship to close the race in 13th place – his best finish. After round 4, Senthil with is now having 11 points and is among the top 19 riders – a stark improvement from his overall 30th position in 2019.

Looking forward to the last round of the championship, Rajiv Sethu said, “We have reached the final leg of the championship and I am excited to give it my all in the last round here at the Chang International Circuit. Having raced at this circuit previously, I am optimistic about the results and will personally try to snatch as many points as possible by claiming the top position at the leaderboard.”

Sharing his thoughts, Senthil Kumar said, “This season has added immensely to my learning curve. I am happy that so far, I have been able to gain a few points and stand in a better position than last year. In my last outing at Chang earlier this year, I finished in the Top 13. I am looking forward to racing again at Chang for the last round and am hopeful of claiming a better finish for my country and team.”