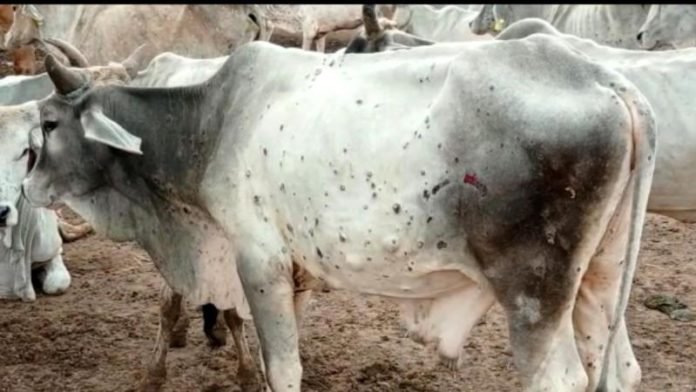 Jaipur Greater Municipal Corporation has opened the state’s first lumpy care centre at the Hingonia Gaushala in the city.

Mayor Soumya Gurjar said that to check the outbreak of lumpy skin disease in Rajasthan, the Hingonia Gaushala, which is run by the Municipal Corporation of Greater Jaipur, has opened the state’s first lumpy care centre.

The gaushala has around 13,500 cows, out of which 125 have been infected by the disease. A four-member committee has been constituted to monitor the infected cows on a daily basis.

A help-line number in this regard has also been issued for livestock owners of the corporation area. If any shelterless cow is found infected or symptomatic, help can be obtained by reporting the matter at the helpdesk number.

A separate ambulance should be arranged to bring the cows infected by the lumpy virus to the gaushala.

The lumpy skin disease has created panic in Rajasthan. It is a contagious skin disease that has killed more than 5,000 cattle heads in the desert state so far, while over one lakh cattle heads have been infected by it.

Earlier, Chief Minister Ashok Gehlot appealed to the Central government to provide financial help to the state for controlling the lumpy skin disease spreading among the cattle in the state.

The lumpy virus has now spread to cows and buffaloes in 17 districts of Rajasthan.

Expressing concern over the spread among the cattle, Gehlot said that the state government was taking all possible measures to control the disease.

He urged the Central government to provide financial and necessary assistance to save the cow progeny and cooperate in effective control of the disease. Gehlot appealed to the cattle owners of the state and to the Gaushala operators to be patient and urged the public representatives and voluntary organisations to cooperate with the state government in the controlling and prevention of the disease.

Gehlot said that livestock is the lifeline of the farmers of Rajasthan. The cows provide economic support to the cattle rearers in the event of famine. For centuries pastoralists have been fighting against adverse conditions on the strength of livestock. He said that the state government is committed to maintaining the importance of the valuable livestock wealth of the state, to make them financially self-reliant by providing them the means of employment along with their development and growth of livestock production.

Over 4,292 cows have already died as the virus has now spread from 10 districts of western Rajasthan to seven more districts. These include the capital Jaipur district as well as Ajmer, Udaipur, Kuchaman City, Sikar, Jhunjhunu, and Churu among others.

State Animal Husbandry Minister Lalchand Kataria has directed to ban the transportation of animals for the next one month. In Jaipur also, the disease has infected cows in the Hingonia Gaushala.

According to the government report, over 1.21 lakh cattle have been affected by the virus.

Around 94,222 are undergoing treatment and 42,232 animals have been recovered. Most animals are said to be infected in Barmer. The death of 1,307 cows has been recorded here.