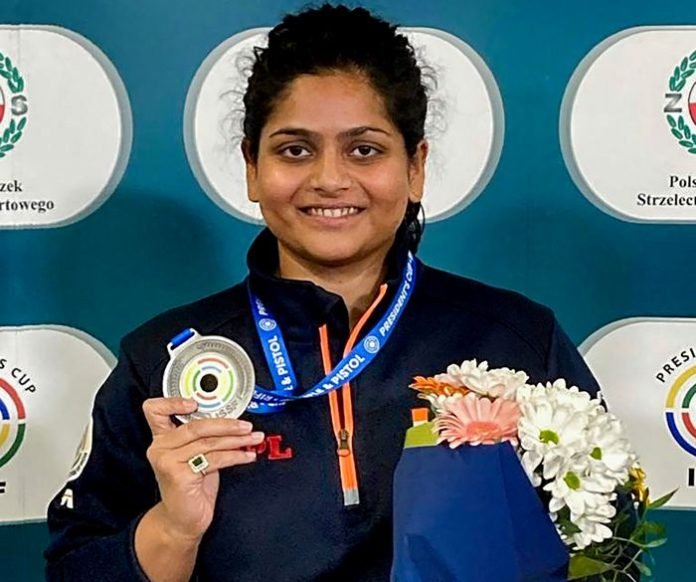 Rahi Sarnobat was a class act in the climax, as she unleashed a perfect five on the last round to beat Naamya Kapoor 37-31 in women’s 25-meter sports pistol in the National shooting championship.

The gold was secure after two shots, but Rahi was unstoppable at the Dr. Karni Singh Range, Tughlakabad, on Monday.

The 31-year-old Rahi had qualified in fourth place with 581 but was quite at home in the final in which shots of 10.2 or more alone fetch a hit. Having had a remarkable run in the World Cups this season with gold and silver, Rahi was ever so comfortable in handling the
competition.

World junior champion Naamya did well to get past Manu Bhaker and qualification topper Rhythm Sangwan (585) to the silver medal. Esha Singh, Divya TS, Abhidnya Patil and Shri Nivetha were the others to make the final.

Naamya was able to assert herself in the junior competition, which was a thriller as the top three were tied on 27. Esha took the bronze as she had a tie-break score of 2 as compared to 4 each by Manu and Naamya.

There was a tie for the gold, as both Naamya and Manu were level on 30. In a fitting climax, Naamya got all the five hits, while Manu missed the last hit. The composure of the Delhi girl Naamya who won world junior gold in the same event on her international debut in Lima, Peru, was commendable.

Qualification topper Sift Kaur Samra (1171) was overtaken to the bronze medal by Ayushi Podder. Ashi Chouksey, Shrishti Mishra, Apurvi Chandela and Bhakti Bhaskar Khamkar were the others to make the final.

Olympian Anjum Moudgil shot 1161 and missed the final as Shrishti took the last berth with the same score, and a better number of inner-10s, 52x to 48x.

Anjali Bhagwat who had made the Sydney Olympics final in air rifle, placed 10th with 1159, in a strong field of 131 shooters.