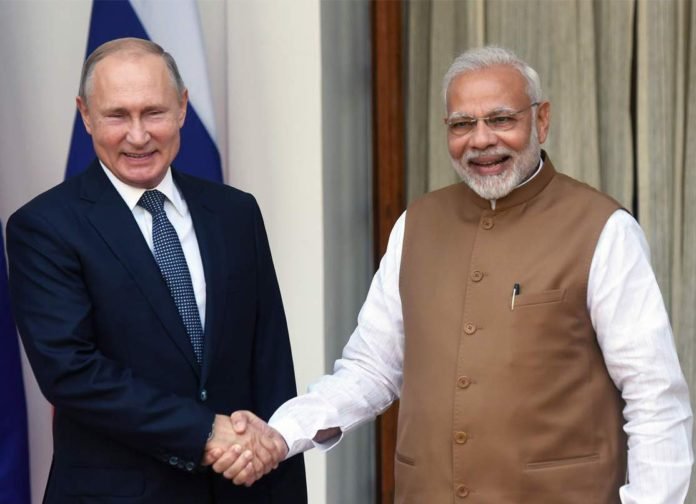 Prime Minister Narendra Modi on Monday met Russian President Vladimir Putin in New Delhi, and while welcoming him said that India’s special and strategic partnership has continued to strengthen irrespective of the Covid pandemic. He said that the two countries have cooperated strongly during the pandemic, from vaccine trials and production to assistance to returning nationals to respective nations.

“Despite the challenges posed by COVID, there is no change in the pace of growth of India-Russia relations. Our special & privileged strategic partnership continues to become stronger,” PM Narendra Modi said during the meeting with Russian President Vladimir Putin on Monday.

“In the last few decades, the world witnessed many fundamental changes and different kinds of geopolitical equations emerged but the friendship of India and Russia remained constant,” PM Modi said.

The Prime Minister said the relation between India and Russia is truly a unique and reliable model of interstate friendship.

“We perceive India as a great power, a friendly nation, and a time-tested friend. The relations between our nations are growing and I am looking into the future,” PM Modi added.

PM Modi said that Indo-Russian friendship has been constant and both countries have assisted each other and taken care of each other’s sensitivities.

Prime Minister Modi said that the two countries have been in constant touch on Afghanistan and on other regional issues. “The first 2+2 dialogue between our defence and foreign ministers has taken place. It starts a new mechanism to improve our behavioural cooperation,” he said.

He also said that India and Russia are heading closer in cooperation in space and civil nuclear sectors. “Under Make In India, co-development and co-production are strengthening our partnership in the defence sector,” PM Modi added.

Putin flew into India on a short visit for the 21st India-Russia summit. The day began with Defence Minister Rajnath Singh’s talks with his Russian counterpart Sergey Shoygu under the framework of the India-Russia Inter-Governmental Commission on Military-Technical Cooperation.

At the end of the talks between the defence ministers, both sides inked an agreement for joint production of over six lakh AK-203 assault rifles at a manufacturing facility in Uttar Pradesh’s Amethi besides firming up another pact on military cooperation for 10 years. The rifles will be manufactured for the Indian armed forces at a cost of around Rs 5,000 crore.

The agreements were signed at the 20th meeting of the India-Russia Inter-Governmental Commission on Military and Military-Technical Cooperation (IRIGC-M&MTC).