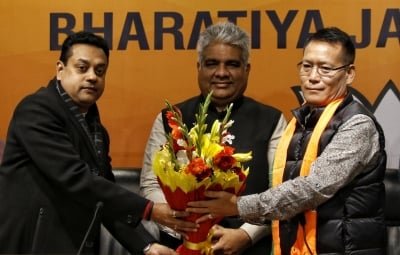 Manipur minister and NPP leader Letpao Haokip on Thursday joined the BJP in the presence of Union minister Bhupender Yadav.

NPP is BJP’s ally in Manipur and Hakoip is the youth affairs and sports minister in the BJP-led government in the state.

Hakoip joined the BJP in presence of the party’s national spokesperson Sambit Patra and the Union minister.

Yadav and Patra are BJP’s in-charge and co-in charge for Manipur polls, respectively.

NPP has two ministers in the Manipur government, including the deputy chief minister.

Welcoming Hakoip into the party, Yadav said he was joining the BJP after being impressed with Prime Minister Narendra Modi’s leadership, and good governance by BJP governments both at the Centre and the state.