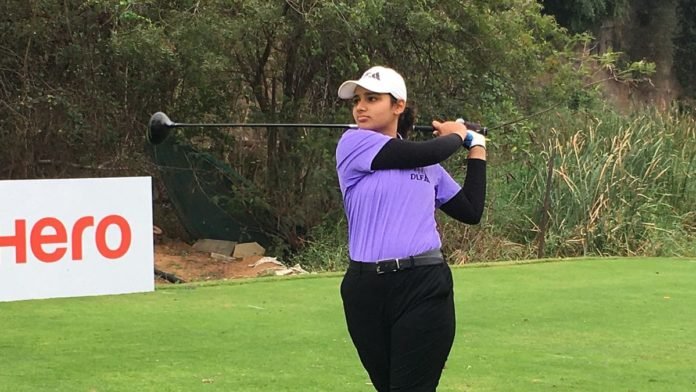 Jahanvi Bakshi completed a superb back-to-back win as she rallied from a one-shot deficit to register her fourth success in 2021 by taking the 13th leg of the Women’s Pro Golf Tour at the Boulder Hills Golf and Country Club in Hyderabad.

Seher Atwal, who shared the overnight lead with Panchkula’s golfer Amandeep Drall, needed a birdie on the 18th to get into a playoff with Jahanvi, but she managed only a par as Jahanvi, who finished a group earlier, emerged the winner.

Meanwhile, Vani Kapoor, playing alongside Jahanvi, had a chance to join the latter, but instead, she bogeyed the par-5 18th and fell one behind.

Jahanvi (69) totalled 7-under 209 while Seher (71) was 6-under 210. Vani Kapoor (70) and Amandeep Drall (72) were tied third on the final day, which began with the promise of a thriller but in the end, Jahanvi, despite her young age, kept her nerves and registered a memorable win.

Pranavi Urs shot 70 and was sole fifth while Jahanvi’s sister Hitaashee (73), who was level with her, had two bogeys on the back nine. That cost her a lot and she ended sixth.

Jahanvi, who began the week with an even-par 72, had a 68 on the second day. In the final round, she birdied fifth and seventh, both of which were par-5s and turned in 2-under. On the back nine, she dropped a shot on par-5 14th but made up on the next with a birdie on 15th. She parred the last three holes, including the 18th.

Seher, with a bogey on the second, dropped back but with birdies on fourth and ninth, turned in 1-under. On the back nine, she bogeyed 12th but picked a shot on 14th. Needing a birdie on the challenging 18th, which did not yield a single birdie on the final day, Seher managed only a par and finished one shot behind Jahanvi.