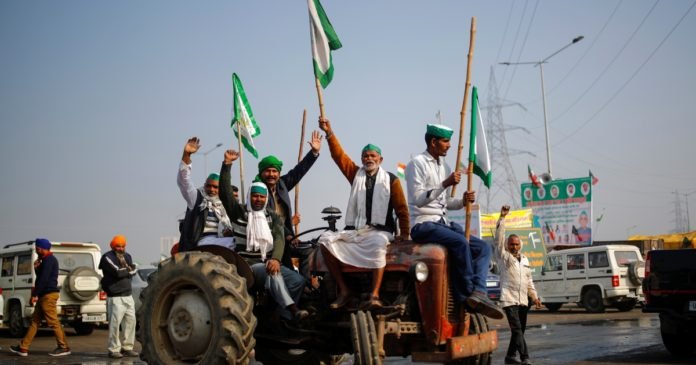 Farmers camped near Delhi’s Singhu, Tikri, and Ghaziabad borders will march in victory today as they return to their villages in Punjab and Haryana following over a year of agitation after which the Centre withdrew its three farm laws.

After over a year of braving extreme weather, the COVID-19 pandemic and living in tents on highways, farmers’ unions are now dismantling their makeshift camps along the border. They will gather for some ceremonies before embarking on their journey home. Special arrangements have also been made along the highways to greet the farmers as they return home on tractors.

Slow traffic movement was seen at the KMP flyover near the Singhu border as farmers head back to their homes after the suspension of their year-long protest.

The Samyukt Kisan Morcha (SKM), which spearheaded the farmers’ protest, on Thursday decided to suspend the long-drawn agitation after the government agreed to consider all its other demands, days after the repeal of the three laws.

Farmer leader and a member of the SKM’s empowered committee, Shiv Kumar Kakka said the SKM will honour those locals who helped farmers selflessly during the course of the agitation and strengthened the movement. The SKM also said that it would hold a review meeting on January 15.

Some of the protesting farmers from Punjab will visit the Golden Temple in Amritsar on December 13 to offer prayers after the completion of their successful agitation. And to celebrate the success of their agitation, some farmer leaders will leave for their villages on decorated tractors from the different protest sites on the borders of Delhi. For this, the farmers have arranged a 51-foot-long trolley on the Singhu border for all the top SKM leaders.

Despite some farmers already heading home, the ‘langar’ (community kitchen) started a year ago continues to function, giving food parcels to those who are going back.

Some women, who were taking care of household chores back in the villages and didn’t meet their protesting family members for the past one year, have reached the borders to join their families on the return journey.

A day before their scheduled departure from the protest sites at Delhi borders, senior farmer leaders and members of the Samyukta Kisan Morcha (SKM) on Friday visited the Bangla Sahib gurdwara to offer prayers. The farmer leaders, including Balbir Singh Rajewal, Rakesh Tikait and Manjeet Singh Raye, were honoured by the Delhi Sikh Gurdwara Management Committee.

After the visit, Rajewal said farmers won against the “black” farm laws because they had the blessings of Guru Sahib and the support of the public. We apologise to Delhi people for inconveniences caused to them due to the agitation at the city’s borders. Their support for the movement will be remembered, the Delhi Sikh Gurdwara Management Committee quoted Rajewal as saying in its statement.

Farmers’ leaders said locals offered “immense help” to the protesters in different ways such as providing electricity and water connections from their homes. They said now it is time for them to show their gratitude towards such people and honour them.

“We have formed a committee to make a list of such locals so that we can honour them. Before going home, a ceremony will be held at the Singhu border tomorrow to honour them. We will garland them and present shawls and sweets,” Kakka told PTI. Kakka said that some local residents and traders became good friends with farmers and their bond will remain intact. He said the SKM used to hold all its important meetings at the Kajaria Tiles showroom at the Singhu border. The shop owner gave the entire space to farmers.